By Aaron Short
The Brooklyn Paper 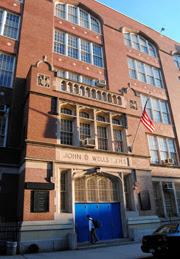 Charter school opponents in Williamsburg have filed a lawsuit to keep a Success Academy from opening inside MS 50 on S. Third Street.

Williamsburg: Power couple pushes for two more charters in Williamsburg
Williamsburg: Some W’burg parents don’t want ‘Success’ in their schools
Williamsburg: Now Eva Moskowitz wants to open another ‘Success’ charter school in Williamsburg
Downtown: Controversial charter pitches another school — in nabes it jilted
Election: Campaign tricks no treat for former candidate
Election: Proxy battle in 34th District as Reyna fights Vito’s ghost over B’way Triangle
Charter school officials who hope to open a 200-child elementary school in Williamsburg this fall violated state law by not conducting enough outreach in neighborhood and failing to secure the support of the community, a new lawsuit alleges.
North Brooklyn parents and community leaders accused the Harlem-based Success Charter Network of denying the existence of neighborhood opposition and “failing to solicit and carefully consider community input” into the proposed charter school, which is trying to set up shop in MS 50, a struggling S. Third Street middle school.
On the eve of a city panel’s vote on the proposed charter — scheduled for Thursday — more than five dozen plaintiffs filed suit seeking to stay the decision on what they described as an “unlawfully chartered school.”
Success officials said that they gathered 1,400 signatures from North Brooklyn parents interested applying for the new school, according to court papers — but an attorney representing charter opponents said that Success staffers never sent state officials any proof.
“They described the same petition for all three schools [they plan to open in Brooklyn this year],” said Advocates for Justice’s Arthur Schwartz, who faulted state trustees for neglecting to demand better evidence. “They didn’t say where they got them. My understanding is they collected them from all over Brooklyn.
Success Charter Network CEO and former Manhattan Councilwoman Eva Moskowitz proposed a new elementary school in North Brooklyn’s District 14 last year — one of seven schools she hopes to manage in Brooklyn by 2013.
After the city proposed placing the school share space with MS 50, some Williamsburg parents and activists have mobilized against the high-performing charter group, which boasts high test scores and the backing of Mayor Bloomberg.
Critics scrawled arguments against the school’s marketing campaign on subway posters at the Bedford Avenue L station in January and blasted its organizers for allegedly targeting wealthier children in the Northside rather than English language-learners in the Southside.
Hundreds of parents demonstrated against the plan at two public hearings at MS 50 last month, clashing with supporters — some bused to the neighborhood from Success locations in Harlem.
Luis Garden Acosta, director of the neighborhood arts and culture group El Puente and a plaintiff in the suit, said opponents were forced to take to the courts because the city’s Panel for Education Policy — which has the final say on charter applications — is a “rubber stamp body with no integrity” and that the “public school system is at stake”.
“Eva Moskowitz is the kind of irresponsible public persona who would in this most segregated city, attempt to pit black parents from Harlem against Latino parents from Williamsburg,” said Garden Acosta. “I believe she will go to any length to achieve her ends, and her ends are rooted in the corporate interests that support her and her desire to become mayor of New York City.”
A Success Charter staffer called the lawsuit “shameful” and said it would get in the way of neighborhood children receiving a better education.
“We firmly believe this location is perfect for students of all demographics and backgrounds,” said Success Charter Network’s Jenny Sedlis. “The answer to this parental demand for better school options is to open more good schools to serve more children, not to file frivolous lawsuits to protect the broken status quo.”
The suit is the second that parent groups have filed against the quickly expanding charter organization.
Parents in Cobble Hill sued Success Charter Network in February, claiming the network “unlawfully circumvented” state education rules in order to open there when it was supposed to open in a different school district.
Schwartz believes that state authorities have let Success “slide in” with “generalized, unsupported assertions” about having backing from neighbors in Williamsburg, despite the law’s stringent requirements.
“In the two lawsuits growing out of this circumstance we hope not only to stop the siting of these two schools, but to force those granting the charters to enforce the rigorous community outreach, input and support requirement put into place by the legislature,” he said.
Reach reporter Aaron Short at ashort@cnglocal.com or by calling (718) 260-2547.
Posted by ed notes online at Friday, March 02, 2012