Posted on March 13, 2012 by seattleducation2011 | Leave a comment
“Why should Bill Gates views matter to me as a public school parent? I actually have a B.S. in education. Does he have the qualifications to speak for me? I say no.” 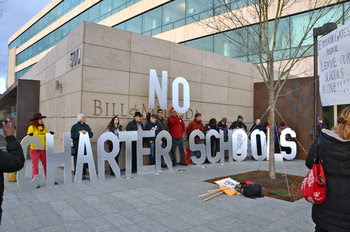 Public education advocates outside the Gates Foundation headquarters in Seattle, Washington on March 1st.
The following is an excerpt from an article written by Jesse Hagopian, founding member of Social Equity Educators(SEE) and contributing author of an upcoming book titled Education and Capitalism: Struggles for Learning and Liberation. (Go Jesse!)
From ‘Occupy Education’ Debates the Gates Foundation originally posted in Common Dreams:

“Gates Foundation you will fail / Education is not for sale!”
The chants of some 150 teachers, students, parents and Occupy Seattle activists reverberated off the windows of the global headquarters of the Bill & Melinda Gates Foundation – a leading promoter of a corporate brand of education reform—announcing we were ready for our scheduled debate about the schools as part of a national call to “Occupy Education” on March 1st. 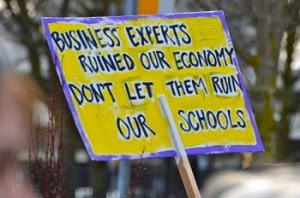 From Oscar Grant Plaza in Berkley, California, to the Department of Education in Washington, D.C., Occupy activists schooled the nation with experiential learning demonstrations with the instructional objective of making education a right for the 99 percent, not a privilege for the 1 percent. In Seattle, when our spirited march for education arrived at the Gates Foundation, many of the event organizers were as nervous as kids before a high-stakes test–not because they doubted the validity of challenging one of the biggest backers of charter schools and standardized testing – but because many expected a no-show from the foundation that they would have to simply chalk up as an unexcused absence.
As it turned out, the wealthy foundation sent three poor souls to debate the Occupy movement. I should admit from the start that it wasn’t a fair competition—something akin to the Varsity taking on the JV team; in our corner we had people who have attended public schools, taught in public schools, and are parents of kids in public schools; all they had were policy analysts and public relations specialists.
The “throwdown” began with the Gates Foundation PR spokesperson declaring that he believes in the right of every students to receive a quality education and that some of the statements that were made during our rally mischaracterized the Foundation—without giving an example of what it would take to get a quality education for all students or explaining what Occupy got wrong.
Wayne Au, former high school teacher, editor for Rethinking Schools magazine, and education professor at the University of Washington, spoke next on behalf of the Occupy education delegation, challenging the foundation on its record of supporting charter schools even after a Stanford University study showed that they underperformed public schools. Professor Au then took on their support for standardized testing, which recently helped to push the Washington State Legislature to pass SB 5895 which mandates that test scores be used in teacher evaluations, and explained how such tests force teachers to narrow the curriculum to the tested items. Then he set the hook: “If all the students passed the tests you advocate, that test would immediately be judged an invalid metric, and any measure of students which mandates the failure of students is an invalid measure.”
The reply from PR spokesman for the Gates foundation suffered from a common mistake of a rookie on his high school debate team—he failed to address any of the points the opposition raised. The spokesman retorted, “We think that testing should be part of multiple measures and not the only judge of student performance.”
At this point I couldn’t help but enter the debate. I grabbed the bullhorn and, taking notes from a certain smart aleck in my fifth period who has used the strategy against me, I asked a question that I knew he wouldn’t be able to answer to sully his image in front of everyone: “How did standardized testing enter the public schools originally?”
“I’m not the person to answer that question,” he replied.
It worked. So I moved on to phase two of the class-room know-it-all strategy: declare victory against authority.
“I consider this debate a victory for our side, if they do not know how and why standardized testing entered the public schools in the first place. As a history teacher I find it insulting to come to a debate about education and not know the history of how testing entered the public schools. I can break it down about it being part of the eugenics movement…”
As Wayne Au explains in his book, Unequal By Design, standardized testing entered the public schools in the early 1900s as a way to graft scientific management models used in assembly line production onto the classroom by Taylorists and Eugenicists—the pseudo scientists that believed intelligence is genetic and that whites were biologically superior to other races or ethnic groups. Au writes,


“Looking back to its origins in the eugenics movement, Standardized testing provided the technological apparatus for the functioning of the production model of education….It is no coincidence that I.Q testing, eugenics and standardized testing all become prominent during the same period….”

The point I made to the Gates foundation policy wonks was this: While they claim to be part of a 21st century civil rights movement for education—advocating policies they insist are specifically designed to close the achievement gap—the standardized tests they demand were designed by racist pseudo-scientists of the early 20th century. As NAACP founder W.E.B. DuBois wrote,


“It was not until I was long out of school and indeed after the (first) World War that there came the hurried use of the new technique of psychological tests, which were quickly adjusted so as to put black folk absolutely beyond the possibility of civilization.”

To read the article in full, go to Common Dreams.
Posted by ed notes online at Saturday, March 17, 2012