S.F. schools waive seniority for some in layoffs 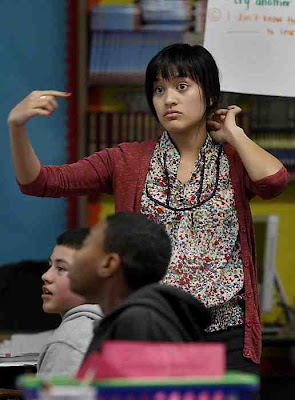 Kathleen Florita, a first-year teacher at Everett Middle School, wouldn't be laid off under the school board's new layoff guidelines.


Teacher Kathleen Florita recited from memory a note she received from a student at San Francisco's historically low-performing Everett Middle School.
"Please don't leave like everyone else does," wrote the student.
Florita would have been among the first to get a pink slip this year in what has become an annual ritual of teacher layoffs based on her low seniority.
It appears not this year.
The San Francisco school board set aside seniority rights Tuesday night to save the jobs of 70 low-seniority teachers in 14 low-performing schools. Many of the teachers were brought in just last year to help improve the schools.
The board's decision, on a 5-1 vote, would protect teachers in those schools - even those without seniority - when the district issues layoff notices in March. State law requires that the final decision to deviate from seniority in the layoff process be left to an administrative law judge.

All 14 schools where those teachers work fall in what the district calls the Superintendent's Zone. The schools are marked by high-needs students and low test scores, and are mostly in the Mission and Bayview-Hunters Point neighborhoods.
"The schools we're proposing to skip have had four times the teacher turnover" than other schools in the district, said Superintendent Carlos Garcia in a statement. "We must do what's right for the children in our highest need schools and communities."
No matter what the administrative law judge decides, the vote Tuesday night challenged a core tenet of the teachers union in which job security is based on experience.
Teachers union leaders criticized the board's decision, saying it didn't make sense, because it would mean more layoff notices for teachers at struggling schools in the city that aren't in the special zone.
"They are saying this is in the name of social justice," said Dennis Kelly, president of the United Educators of San Francisco. "You don't have justice for some."

Kelly said the union will argue its case before the administrative law judge and consider filing a lawsuit.
All 14 schools in the special zone have had high staff turnover in years past and have received significant resources to recruit, train and keep teachers, Garcia noted. Nine of those schools, he said, received up to $5 million in federal grants to boost test scores.
"We made a huge investment," Garcia said. "We made a promise I believe we have to keep."
At Everett, more than a third of the teachers would face layoffs without the board's decision.
After all the literacy training and team building at the school this year, it makes no sense to lay off all those teachers, Florita said. Aside from that, the children want and need stability at Everett, she said.

The district already shields math, science and special-education teachers from layoffs because those positions are hard to fill. Skipping the low-seniority teachers in the 14 schools as well won't "tilt the Earth off its orbit," Garcia said.
Teachers and principals at other struggling schools disagreed.
"It's devastating," said Jennifer Moless, a kindergarten teacher at El Dorado Elementary School, where an estimated six out of 15 teachers will now get a pink slip. "How do we tell the children here that they're not as important as the children in the Superintendent's Zone?"
The board also voted 5-1 Tuesday to issue 485 layoff notices by the state's March 15 deadline. Notices will go out to 210 teachers and counselors, 123 administrators, 117 teacher's aides and 35 preschool staffers. Board member Kim-Shree Maufas voted against the measures.

Garcia said San Francisco schools face an $83 million budget shortfall over the next two years, even if voters approve Gov. Jerry Brown's proposals to raise the state sales tax and boost income taxes for the wealthy. If they reject Brown's plan or other tax proposals that may be on the November ballot, the situation will likely be worse.
As a result, Garcia said, the district has to make plans for a significant number of layoffs.
The exact number, however, will not be final for months. Aside from state budget issues, contract negotiations with the teachers union could include employee concessions such as more unpaid furlough days that would result in fewer layoffs.
This article has been corrected since it appeared in print editions.