What We Told the State Education Commissioner 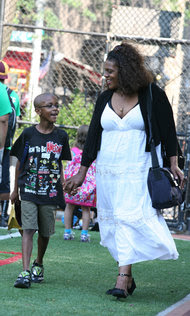 Katherine Sprowal is a member of the District 3/P.S. 75 P.T.A. and School Leadership Team, a Local Parent Community Organizer, a former Harlem Success Academy charter school parent and a Harlem resident.
Question
Asked By SchoolBook Editors
What would you tell -- or ask -- the state education commissioner?
3 Responses
Respond
0

Jeff Nichols • March 12, 2012, 2:25 PM
When a charter school tries to move out a student it thinks will perform poorly on standardized tests, who is to blame? The school, whose very existence is predicated on achieving better results on these tests than traditional public schools? Or the state, which creates this perverse incentive in the first place? We know that student performance on these tests tracks family income more closely than any other measure -- school size, class size, unionized or non-unionized teachers -- you name it. So when the schools are compelled to improve these scores at all costs, the highest cost will inevitably be paid by low-income students, whose traditional schools are being shuttered only to have the replacement charters close their doors on them. What I would tell the education commissioner is that until teacher and school evaluations are decoupled from standardized test scores, the responsibility for this kind of outrage will be his.

Mary Conway-Spiegel • March 12, 2012, 2:41 PM
Ms. Sprowal, thank you for seizing a moment and using it to tell Matthew's "one story." It's most unfortunate Dr. King perceives Traditional Public Education and it's students this way. Why? It suggests that the Chancellor is out of touch with reality...Matthew's "one story" is more pervasive, more common, more the norm than he's aware.
Perhaps like most adults Dr. King has overcome incredible odds himself (I do not know Dr. King personally). Perhaps, as he reflects on his journey to success he's forgotten his own story. I forget the challenges of my adolescence, the way I "froze" during standardized tests and the way both of those factors altered my progress in High School irrevocably.
When we dismiss each "one story" we consciously or unconsciously cut ourselves off from what connects us to our own story, the children in our lives, our community and how that thread is one of the most essential aspects of education...the human thread.
Growing up was messy and chaotic and that didn't change after we - all the grown ups - reached adulthood and began running the world.

Jeff Nichols • 49 minutes ago
What would I ask the commissioner? Why is there no way for parents, as part of teacher evaluations, to report in detail the daily acts of caring for students' emotional well-being that we know are essential to good academic performance? When students are aware that their parents and teachers have a strong relationship and regularly share information and ideas about them -- which has been true for us throughout our experience at three public schools in NYC -- their academic performance will continually improve. Is there a way to quantify this? Counting up how many emails teachers have sent to parents at the crack of dawn or late in the evening? Giving a teacher a numerical score when a bullying situation at school is resolved, and the former bully and target become friends? When a teacher consoles a child who's upset, there is no guarantee that will be reflected in this year's test score. But it will be reflected in the likelihood that child will stay in school and develop a love of learning.