Eva Offers Pizza to Sign Up - A Cheap Date

By Aaron Short
The Brooklyn Paper 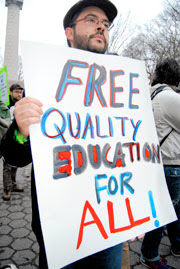 Photo by Elizabeth Graham
Protesters railed against the Success Charter Network — which is in the midst of a marketing campaign —before the city approved the group's planned Williamsburg elementary earlier this month.

Del.icio.us
The secret to Success might be pizza.
The charter school group behind a controversial plan to open an elementary school in Williamsburg is stepping up its marketing efforts with pizza parties and pamphleteering to recruit new students and win neighborhood support after angry parents sued the organization for stifling opposition and not conducting community outreach in the Latino Southside.

Last Wednesday, Success Charter Network served slices to moms and dads who had applied to the new school, which will share space in a S. Third Street building with MS 50 at Anna Maria Pizzeria on Bedford Avenue.
Between bites, dozens of parents showed support for the charter by signing an affidavit that Success may use in court to prove it has the backing of the community.
Success officials said the pizza wasn’t part of its new marketing pitch, but said the school’s outreach efforts match those used at their charters in Manhattan and elsewhere in Brooklyn.
“We planned consistent outreach in the neighborhood up until the application deadline,” said Success external affairs director Jenny Sedlis.
But opponents of the school see the pizza promotion — coupled with new bilingual advertisements at bus and subway stations, a wave of mailings, and eager canvassers dispatched outside Greenpoint’s PS 31 and PS 34 — as an effort to re-shape public opinion surrounding the politically connected charter.
Angry neighborhood parents sued the Success Charter Network, the Department of Education, and the State University of New York earlier this month, accusing school officials of not conducting enough outreach in Williamsburg’s Hispanic community.
The suit didn’t stop the city from approving the school’s charter, but a court could still block Success’s plan.
Opponents have long complained that the high-ranking schools — run by former Councilwoman Eva Moskowitz — are targeting affluent parents in the Northside and Greenpoint and instead of Latinos.
“They’re going to the two highest performing schools in Greenpoint two miles away and there’s no reason for that,” said North Brooklyn parent Brooke Parker. “They’re trying to poach kids out of those schools.”
Despite opponents’ allegations of selective recruiting — including ones slapped over Success’s English language subway station posters — the charter network insists it is targeting Spanish-speaking students.
“We’ve done extensive outreach in Spanish which is reflected in the fact that one-third of applicants are English Language learners,” said Sedlis.
Sedlis said public outreach is an “ongoing process” and that Success would send out two more rounds of mailers before the end of the month.
So far, the Success Charter Network has received 700 applications — 196 from families in the neighborhood — for its Williamsburg school, and 950 applicants — 260 from families in the area — for its planned Cobble Hill academy.
The Williamsburg school, which Success hopes to open in August, would start with 190 kindergarten and first grade students and add one grade per year through eighth grade. Children obtain entry to the school through a lottery intended to give preference to families living in Williamsburg, Greenpoint, and Bushwick.
Reach reporter Aaron Short at ashort@cnglocal.com or by calling (718) 260-2547.
©2012 Community Newspaper Group
←Link: Concrete and plastic will replace Boardwalk wood, city says
→Mean Streets: Councilman targets speeding motorists on Atlantic

Greenpoint parent from Greenpoint says:
PS31 and PS34 are two of the top performing schools in NYC! Why are they trying to steal their students? PS31 scores higher than Success Academy on standardized tests and was just listed as the best school in NYC - ahead of Success Academy.
Yesterday, 1:36 pm
Tal Barzilai from Pleasantville, NY says:
Hearing that they had to have pizza parties really showed how desperate they were to get their support even it meant to doing PR stunts hence they did a Bruce Ratner for that.
Yesterday, 3:28 pm
Maybe Future Success Parent says:
I am so excited about this school. I moved here 8 months ago from Charlotte.

After doing all the research and the tours of PS 84, we want to go to success.

I really hope my child get's in off the lottery. I just don't understand why so many people do not want this school to open.
Yesterday, 8:34 pm
Greenpoint parent from Greenpoint says:
There's a lot of reasons people don't want Success Academy's co-location in our public schools. Here are a few.

1) Success Academy's has a record of expelling English Language Learners and kids with special needs. Our public schools teach everyone. Public school attrition records are available and transparent.

3) Our elementary schools are under-enrolled. We have no need for another. This "choice" will undermine the success of the public schools we have.

4) Success Academy has been trying to poach students from other schools, like PS31 - a school that is BETTER than Success Academy by Success Academy's own standards. In fact, PS31 is considered the BEST SCHOOL IN NYC! And PS31 does it without counseling out anyone.

4) Privately managed schools, like Success Academy, have no public oversight for 5 years. So, once opened, we have absolutely no oversight over it until it's charter is up for renewal. Success Academy has a terrible history of obscuring data and responding to FOIL documents, and that is a great concern.

5) We have already have excellent options in our district, including 6 “A” rated elementary schools that have room for families.

6) Of the 4 elementary schools in the area surrounding MS 50, none of the schools are failing. PS414 is opening in the fall with a promising progressive curriculum. PS84 is a "B" school on the rise with a brand new ASD NEST program including classes with a 6/1 student/teacher ration. PS17 had an "A" last year and now a "C." And PS 16 has a "C."

6) We should be building up ALL of our public schools, not creating competition between them for resources.

7) We believe in the principles of Democracy and believe that decisions regarding the use of public funds in the name of the community should be made with meaningful input by the community.

Our elected board - the Community Education Council for District 14 (CEC14), made up of parents and community stakeholders who are knowledgeable about our public schools, voted against the co-location of Success Academy for ALL of the above reasons and more.

I understand that you want choice, Maybe Future, and that you are new to our community. As you learn about the neighborhood you've moved to, I'm certain you will feel better and better about the choices that are already here.

PS84 may not be the right choice for you, Maybe Future. If you're even considering Success Academy, then any progressive model is NOT up your alley. For example, PS31 is an unzoned school with solid roots in traditional education. And, as I said earlier, it has higher test scores than Success Academy.

If you have any questions, feel free to post them.
Yesterday, 10:58 pm
Maybe Future Success Parent says:
What if me, and several hundred people like me, go to Success, like it for our kids. What is wrong with that? Why can't I make the best decision for my child?

PS 31 is also in Greenpoint and I live four blocks from MS 50. Why do I have to go to Greenpoint when I live 4 blocks away? That seems really unfair to my child. I have to tell him, sorry, someone tells me PS 31 is better so go there, but it is 3 miles away verse 4 blocks.

If the school is bad, I will go to another school, but why do you get to choose for me by not wanting the school around? That just does not make sense.

Maybe as you say no one looks at them for 5 years, but from what I read they only get money if they get students, and if they are as bad as you and many people say, then they won't get any students, so they won't make it 5 years
Yesterday, 11:29 pm
Greenpoint Mom from Greenpoint says:
They make it 5 years REGARDLESS, Maybe Future. That's what lack of oversight looks like. It's not fair and it's not pretty.

I listed several problems with the school that cause considerable concern for our district. Everyone of them is serious.

Your desire to have a Succeas Academy conveniently located within a few blocks from your house really can't take precedent over the greater concern for the community and the health and well being of our community and our public schools. Particularly when the need is not dire.

Success Academy doesn't seem to think that PS31 is too far to recruit for a school in the Southside, so I have to imagine that it goes both ways.

If traveling is a great concern for you, there are other "A" rated schools by yo

There are excellent - BETTER - choices available to you, although possibly not as convenient. But, if it makes you feel any better, lots of people travel a bit to their schools. It wouldn't make sense to have a school on every corner. :)
Yesterday, 11:54 pm
it is i from brooklyn says:
It's very irresponsible, actually pernicious, in view of all the issues pertaining to charters, for the powers that be, to continue to authorize charters. Charters are nothing but a shell game. It's time to shut every Tom, Dick and Eva's charter operations down. It's time to hold the authorizers accountable for squandering our tax dollars so recklessly. It's time to stop the exploitation of our school communities. We want our community public schools back! We want our voices to be heard. Mayoral control of NYC public schools has been a disaster.
Today, 8:46 am
FYI from Williamsburg says:
If Success Academy continues to throw these numbers around - 700 applications for Williamsburg - we should really unpack them.

To apply to a DoE school, you must walk into the office with your child and proof of address. That work shows a genuine commitment to the school. Going on a tour of a public school is not considered an application.

There is also no check to see if anyone is a real person with a real child! And it takes a whole of 30 seconds. Then, Success Academy starts calling and calling and calling those families - buying them pizza and spreading lies about the schools around them.

Do you know how I know this? Because I applied to Success Academy under a false name and address with a made up child. I wanted to see the inside of how they do business.

Success Academy is ridiculously hostile to requests for transparency. There is no audit to these numbers and there should be. If these numbers are acting as VOTES, we have a legitimate reason to investigate them.
Posted by ed notes online at Tuesday, March 13, 2012