Racism, Class and the Attack on Public Education: A Talk by Brian Jones

Racism, Class and the Attack on Public Education: A Talk by Brian Jones


In this episode we spend the hour listening to a talk by Brian Jones titled “Still Separate, Still Unequal: Racism, Class and the Attack on Public Education.” He was speaking to a group of teachers and parents in New York City this past February as part of Black History Month.

Brian has worked as an elementary school teacher in Harlem and is currently a fourth grade public school teacher in Brooklyn, NYC. Brian participated with the Grassroots Education Movement, GEMNYC, to produce the documentary An Inconvenient Truth Behind Waiting for Superman in 2011. This documentary was a response to the widely publicized film Waiting for Superman, produced by Participant Media, which also produced An Inconvenient Truth. Education Radio episode 5 “Exposing the Myth of Education Reform” from September of last year highlighted Jones’ work on this documentary and can still be heard on our blog.

In his talk, Brian draws connections between attacks on labor and attacks on public schools. He suggests education reformers’ emphasis on test scores, teachers and outcomes is about “excellence” (using their words), but not equity. Brian addresses the increasingly undemocratic process by which these neoliberal reforms are being implemented, and the potential power of true solidarity between parents and teachers. 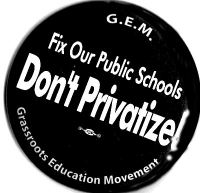 You can down load mp3s of this program here:
Audioport (podcast)
Internet archive