Unions aren’t the enemy, and teachers shouldn’t back down, either

By Melinda Henneberger
http://www.washingtonpost.com/blogs/she-the-people/post/unions-arent-the-enemy-and-teachers-shouldnt-back-down-either/2012/09/11/72951a60-fc4d-11e1-b153-218509a954e1_blog.html
Just when you thought our political parties couldn’t even agree on whether God can stay in Mitt Romney’s heart, along comes the Chicago teachers strike to remind us that when it comes to blaming unions for all that ails our schools, the R’s and D’s have become almost 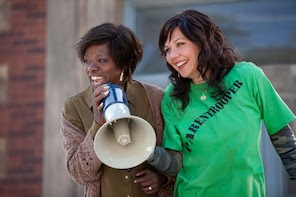 Maggie Gyllenhaal and Viola Davis in the film ‘Won’t Back Down.’ (Kerry Hayes) indistinguishable.
The consensus is that it’s corrupt unions and their middling members who are holding back our kids. “On this issue and this day we stand with [Chicago] Mayor Rahm Emanuel,’’ Republican vice presidential nominee Paul Ryan said on Tuesday.
That’s not how the guy at the top of the GOP ticket has framed the issue: “Teachers unions have too often made plain that their interests conflict with those of our children,’’ Romney said of the strike, which has some 350,000 Chicago kids hanging out at home and worrying their parents this week. And “President Obama has chosen his side in this fight.”
He hasn’t, though. It’s Emanuel, Obama’s former chief of staff, who’s pushed teachers beyond their breaking point. The president is trying to stay out of the mess in his hometown, but a spokesman was quick to brag that it’s Obama’s leadership that “has led to groundbreaking reforms in our schools” across the country.
Like Romney, in any case, Obama strongly supports the idea that teachers should be graded, paid, retained or fired, largely based on how well they teach to standardized tests. There is no evidence, however, that this approach helps kids learn. There’s none, either, that teachers in the most under-resourced schools could with any amount of talent, energy 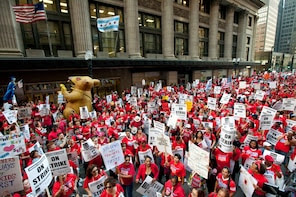 Thousands of public school teachers rally for the second consecutive day outside the Chicago Board of Education district headquarters on Tuesday, Sept. 11, 2012 in Chicago. Teachers walked off the job Monday for the first time in 25 years over issues that include classroom conditions, job security and teacher evaluations. (Sitthixay Ditthavong - AP) and can-do spirit boost scores each and every year.
That would be like saying that each reporter must grow his readership by a certain number of clicks a year to keep his job. Yes, we are moving to that business model to survive. But since war coverage or a long investigative project will only rarely draw the traffic that refried dreck reliably does, we’re no more improving journalism in the process than we are improving education by obsessively focusing on testing.
Every year at back-to-school night, I hear teachers in my kids’ excellent public school openly admit they’ll be teaching to the test; last year, my son’s math instructor went so far as to volunteer to parents that that’s all he really cared about.
That’s not how teachers want to spend their workdays, though. I also see how hard most of them work, how much they care, and all they have 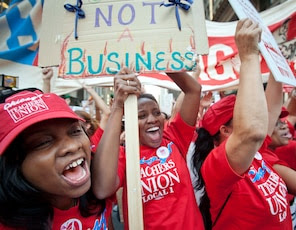 Public school teachers cheer as Chicago Teachers Union President Karen Lewis, unseen, arrives unexpectedly to address a rally of thousands of teachers gathered for the second consecutive day outside the Chicago Board of Education district headquarters on Tuesday, Sept. 11, 2012 in Chicago. (Sitthixay Ditthavong - AP) to deal with from some awfully hard-to-please parents.
Emanuel says that while he appreciates Romney’s “lip service,’’ he’s had all the free advice he needs, thanks: “I don’t really give two hoots about national comments scoring political points or trying to embarrass, or whatever, the president.”
I’m not sure the president is embarrassed; on the contrary, the fact that his buddy Rahm is at odds with teachers will impress some people, even if it also antagonizes traditional allies.
Pop culture, after all, is chockablock with “Bad Teacher,” stereotypes; in last year’s movie of that name with Cameron Diaz, the title character is only in the classroom, where she mostly sleeps and shows movies, because she’s Cameron Diaz and Justin Timberlake star in Columbia Pictures' comedy "Bad Teacher." (Photo Credit: Gemma LaMana - GEMMA LAMANA) saving up for breast implants.
The cartoonish documentary “Waiting for Superman,’’ from Davis Guggenheim, of “An Inconvenient Truth” fame, all but cues the theme music from “Jaws’’ when referencing the Big Labor louts who supposedly make it impossible to get rid of incompetent teachers.
And coming soon: “Won’t Back Down,’’ the story of some pit-bull mamas who fight back against yet another do-nothing teacher, who spends class time talking on the phone, locking kids in the closet and denying them permission to go to the bathroom, yet can’t be fired.
This is not to say that unions haven’t protected some people who should never have been in a classroom. I know first-hand that they have, thanks to the first grade teacher who called my daughter names and yanked her arm so hard she cried as she struggled with a math problem at the board.
I rolled into that school with steam coming out of my ears, according to my husband, and that teacher was disappeared – but was immediately reassigned to a different Maryland school district. 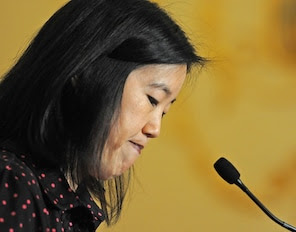 Washington, D.C. schools chancellor Michelle Rhee announcing her resignation at the Mayflower Hotel on October 13, 2010. (Ricky Carioti - WASHINGTON POST)
If organized labor is at the heart of the problem, though, why are outcomes in different areas of the country no different whether teachers are unionized or not? In D.C., Michelle Rhee’s scorched-earth tenure as chancellor of public schools resulted in a contract that allows teachers to be fired if they have two poor evaluations in a row, with the result that hundreds have been let go, including some with stellar reviews from students and parents whose students just didn’t do well enough on standardized tests.
And let’s not forget why we have teachers unions in the first place: It’s because in the not-so-great old days, mostly female teachers had no recourse when they were fired for no good reason, or were otherwise treated unfairly. My Aunt Ginny, a popular but strict teacher of English, German, and French, left her job in the only high school in our town rather than give in to pressure to award a football star a better grade than he had earned. She wouldn’t back down, either, and was effectively forced out of her profession.
Teachers in Chicago have decided they won’t back down at an inconvenient time for the president, but that doesn’t mean they’re wrong. If we really wanted to improve schools, we’d do what education powerhouse Finland does — fund schools equally, value teachers more, and administer standardized testing almost never.