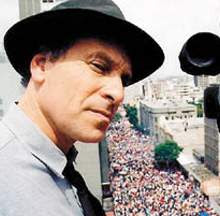 Greg Palast
Greg Palast / Op-Ed
Published: Wednesday 12 September 2012
“In a nearby neighborhood, a charter school, part of the city system, had complete freedom to hire.”
[This article was published at NationofChange at: http://www.nationofchange.org/worst-teacher-chicago-1347463241.

The Worst Teacher in Chicago

Post a Comment
Resize Text + | - | R
Plain Text
Print
SHARE
Email
In a school with some of the poorest kids in Chicago, one English teacher–I won't use her name–who'd been cemented into the school system for over a decade, wouldn't do a damn thing to lift test scores, yet had an annual salary level of close to $70,000 a year.  Under Chicago's new rules holding teachers accountable and allowing charter schools to compete, this seniority-bloated teacher was finally fired by the principal.
In a nearby neighborhood, a charter school, part of the city system, had complete freedom to hire.  No teachers' union interference. The charter school was able to bring in an innovative English teacher with advanced degrees and a national reputation in her field - for $29,000 a year less than was paid to the fired teacher.
You've guessed it by now:  It's the same teacher.
It's Back to School Time!  Time for the editorialists, the Tea Party, the GOP and Barack Obama's Education Secretary Arne Duncan to rip into the people who dare teach in public schools.
And in Chicago, Arne's old stomping grounds, Mayor Rahm Emanuel is stomping on the teachers and pushing them into the street.
Let's stop kidding ourselves. This is what Mitt Romney and Obama and Arne Duncan and Paul Ryan have in mind when they promote charter schools and the right to fire teachers with tenure:  slash teachers salaries and bust their unions.
They've almost stopped pretending, too.  Both the Right Wing-nuts and the Obama Administration laud the "progress" of New Orleans' schools–a deeply sick joke.  The poorest students, who struggle most with standardized tests, were drowned or washed away.  One thing both Democrat Emanuel and Republican Romney demand of Chicago teachers is that their pay, their jobs, depend on "standardized tests." Yes, but whose standard?
Here is an actual question from the standardized test that were given third graders here in NYC by the nation's biggest test-for-profit company:
"...Most young tennis stars learn the game from coaches at private clubs.  In this sentence a private club is...."   Then you have some choices in which the right answer is "Country Club - place where people meet."
Now not many of the "people [who] meet" at country clubs are from the South Side of Chicago--unless their parents are caddies.  A teacher on the South Side whose students are puzzled by the question will lose their pay or job. Students on the lakefront Gold Coast all know that mommy plays tennis at the Country Club with Raul on Wednesdays. So their teacher gets a raise and their school has high marks.
Help us speak truth to power. Donate what you can afford to support NationofChange.

And while Mayor Rahm promises kids in "bad" schools new teachers (the same ones at lower pay) at high-score schools, in fact, they are never actually allowed in.
But Rahm, after all, is just imposing Bush education law which should be called, No Child's Behind Left.
You want to know what's wrong with our schools?  Benno Schmidt, CEO of the big Edison Schools teach-for-profit business is a creepy, greedy privateer.  But he told me straight: that before Hurricane Katrina, his company would never go into New Orleans because Louisiana spent peanuts per child on education.  He made it clear: You get what you pay for.  Not what you test for.
So the charter carpetbaggers slither in, cherry-pick the easy students, and declare success. The tough cases and special ed kids are left in the public system so they can claim the public system fails.

Here's what the teacher who was terrible at $70,000 but brilliant at $41,000 told me:
"They're not doing this in white neighborhoods.  And they want to get rid of the older, experienced teachers with seniority who cost more.  Get rid of the teachers and ultimately get rid of the kids.  And the charter school gets to pick the kids who get in."
It's simple.  When you look at the drop-out rates in New York (41%) and Chicago (44%), the solution offered is to pay teachers less. They punish those who dare to work in poor schools where kids struggle and you can bet that "washing away" half the kids in our schools is, in fact, exactly what they've planned.
It's notable that, when he lived in Chicago, Barack Obama played basketball with city school chief Arne Duncan, but Obama sure as hell didn't send his kids to Arne's crap public schools. Those are for po' folk.
His kids went to the tony "Lab" School in Hyde Park.  Obama believes what Duncan believes and what Romney believes:  there's no need for universal education and no need to spend money on it.  Yes, they like to say that "children are our future."  But they mean the children of China are our future, the Chinese kids who will make the stuff we want and the children of India who will program it all for us.
After all, how much education does some obese kid from Texas need to stack boxes from China in a Wal-Mart warehouse?
Education is no longer about information and learning skills.  It's now about "triage."  A few selected by standardized tests or privileged birth will be anointed and permitted into better and "gifted" schools.
The chosen elite are still very much needed:  to invest in India and Vietnam, to design new derivatives to circumvent the laughable new banking laws, and to maintain order among the restless hundred-million drop-outs squeezed out of the colon of our educational system.

Democrats' Bantustans, Republicans' Value-less Vouchers.
The Obama/Duncan/Emanuel plan is to create Bantustans of un-chartered, cheaply-run dumpster schools within a government system.  But Romney and the GOP would give every child a "choice" even outside government schools with "vouchers."
Of course, the "vouchers" don't vouch for much.  Romney's old alma mater, Cranbrook Academy, runs at $34,025 a year, not counting the polo sticks and horse.  The most generous voucher program is Washington DC's, beloved of the GOP, which pays about $7,500, or if the student's "choice" is Cranbrook, about 2 months of school.  Hyde Park Day School Chicago is $35,900.  To give each kid a real choice, not just a coupon, means a massive increase in spending per pupil.  I didn't see that in the Republican platform, did you?
The experienced teacher in Chicago who took the pay cut was offered one consolation.  She was told she could make up some of the pay loss by quitting the union and saving on union dues.
So that's the program.  An educational Katrina: squeeze the teachers until they strike, demolish their unions, and drown the students.
Chicago's classroom war is class war by another name.
Class dismissed.
Posted by ed notes online at Saturday, September 15, 2012