The Myth of the “Crappy Teacher” 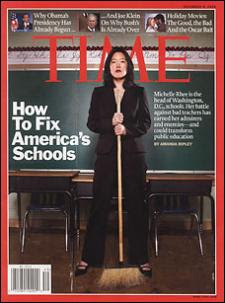 On February 2, I attended a forum at the Fordham Institute titled “Are Bad Schools Immortal?” One of the speakers was Jeanne Allen, founder and president of the Center for Education Reform, which promotes “school choice,” a.k.a. charter schools and vouchers.
In her talk (at 56:27), Allen stated that she had recently visited an underperforming public high school in Philadelphia. To make the point about how awful this school was, she claimed that it had been open for 35 years yet “has never graduated one child who has actually gone to college.” When I challenged Allen on this outrageous claim she then said that “no child has graduated from college in 35 years.”
The purpose of both statements was to show how rotten and entrenched some public schools are. Allen’s story sounded made up to me; it would have been a monumental feat for a high school to track all of its students’ post high school lives for thirty-five years. I asked Allen for the name of the school and, not surprisingly, she said she didn’t remember.
This is not an isolated incident, as vilifying unions and teachers has become the focal point of corporate education reform. Michelle Rhee spent much of her time ”transforming” DC Public Schools (DCPS) by creating stereotypes that they were filled with incompetent teachers who were failing children. The claim was that these teachers had jobs for life, no matter how badly they performed, because the adult-serving, anti-child teachers’ union protected them.
In interviews and at countless speaking engagements, Rhee shared anecdotal stories about her experience walking into different DCPS classrooms and seeing “crappy teachers.” She recounted numerous stories of parents and students begging her to get ”good teachers” into the classrooms. The public was appalled by these stories, and this gave Rhee the upper hand in union contract negotiations, which she was using to try and secure a first-of-its-kind contract that gutted tenure and tied pay to performance. This, after all, was a public relations battle.
Attacks on welfare
Rhee and Allen’s attacks on teachers and unions are reminiscent of Ronald Reagan’s attacks on welfare, in which he promoted a stereotype of welfare recipients who were cheating the system, living high off the hog, and popping out babies just to collect more money. During Reagan’s 1976 presidential campaign he talked about a woman from Chicago who received welfare benefits:
“She has eighty names, thirty addresses, twelve Social Security cards and is collecting veteran’s benefits on four non-existing deceased husbands. And she is collecting Social Security on her cards. She’s got Medicaid, getting food stamps, and she is collecting welfare under each of her names. Her tax-free cash income is over $150,000.”
Even though this story was never corroborated, its repetition and others like it left an indelible image in the minds of people in the US and helped to shape the punitive welfare reform laws that were passed years later.
Susan Douglas, Professor of Communication Studies at the University of Michigan, offered an excellent analysis of Reagan’s strategy:
“He specialized in the exaggerated, outrageous tale that was almost always unsubstantiated, usually false, yet so sensational that it merited repeated recounting… and because his ‘examples’ of welfare queens drew on existing stereotypes of welfare cheats and resonated with news stories about welfare fraud, they did indeed gain real traction.”
This strategy of manufacturing facts or finding a think tank to support an agenda is also employed by many proponents of the corporate education model. It is used as a way to not only attack teachers’ unions, but to go after public schools in general, and push through privatization measures such as charter schools and vouchers.
Rhee has repeated outrageous anecdotes about abysmal teachers, and has also made statements that are not supported by statistics or studies in order to further her goals. In “How to Fix Our Schools: A Manifesto,” which was signed by sixteen school district chiefs, including Rhee, and was published in the Washington Post on October 10, 2010, it stated: “As President Obama has emphasized, the single most important factor determining whether students succeed in school is not the color of their skin or their ZIP code or even their parents’ income—it is the quality of their teacher.”
In this case, not only had the original statement been distorted—President Obama had said that teachers were the most important factor inside the school—the claim was not supported by any studies or data. As Diane Ravitch writes, “The single biggest correlate with low academic achievement—contrary to the film Waiting for Superman—is poverty.”
Yet because it has been reiterated over and over again, the myth of the “crappy teacher,” like the myth of the “welfare queen,” is now a common misconception.
For more on this issue, see "The 'Bad' Teacher"
Crystal,
Glad to see more people pointing out holes in the reform movement propaganda with eloquence and rigor.

I wrote a number of essays on this same front over the last year:


Keep up the work,

I think it's important that educators do not claim that bad teachers are a myth. I fully understand how full of crap Michelle Rhee is, and I get that using the stereotype of the completely lazy teacher who is mailing in his work once he gets tenure is a clever deformer ploy, but at the same time, such folks really do exist. This puts those of us who work in the profession in an odd place: do we stand steadfast against the privatization bloodsuckers with ALL public schools and teachers, or do we speak honestly about the truly abysmal teachers that have been around at least since my dad was a student in the 1920s? Can we talk about the excellent job many schools are doing and still admit that for the most part public education is not close to living up to the principles many of us would like to see inform schools: more child-centered, more focused on promoting learning rather than pouring "facts" into kids heads to no real end, more about creating well-rounded citizens fit to live in a participatory democracy, more work on issues of equity, decency, and so on?

I guess my point is that it's very hard to be forthright about education in the current climate of sound bites and sharply-divisive social and political agendas. I feel pushed to not be honestly critical of incompetents I see in classrooms all the time, of laziness, unprofessionalism, ignorance, emotional abuse, and a lot of other sorts of wrong-doing (not just by teachers, of course), because there is such wide-spread, dishonest bashing of public schools and teachers that I fear how any criticism will be used and that I'll be seen as "washing dirty laundry in public" (what laundry IS okay to wash in public, I wonder?)

I am a staunch opponent of ed-deform baloney, and I will never buy their self-interested, greed-based propaganda. But there is some underlying truth that educators can't afford to ignore just because it applies to a minority and we're all being beaten up with it. Similarly, there's no way to deny that schools of poverty have major problems. It can't ALL be attributed to the fact that people in poverty and communities of poverty have serious problems (well, it can be, but that's as dishonest as suggesting that good classroom teachers will overcome every disadvantage).

This sort of contradiction is not unique to the education debate, of course. It comes up in terms of affirmative action and a host of other places. Trying to be fair-minded and honest makes enemies on all sides, but some of us can't remain silent when speaking to EITHER side in these debates. I guess that is going to get me kicked off a lot of holiday card lists.