Story of a former PS 147 Student

Sibling Bond Strengthens Amid the Ordeal of Cancer 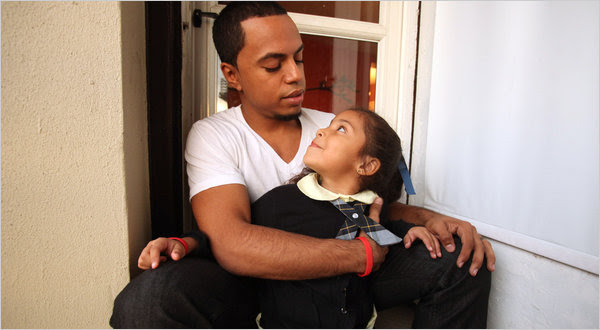 Michelle V. Agins/The New York Times
Eddy Mejia, who has multiple myeloma and can no longer work as a trainer, at his sister’s home in Queens with his daughter, Heavana.

Justina Mejia has become fluent in the language of cancer.
“When you start having hypocalcaemia, which is elevated calcium and protein levels, it’s stage three,” she said one afternoon, describing her brother’s cancer, multiple myeloma, which causes the plasma cells in bone marrow to multiply uncontrollably, forming bone tumors.
“They call them tumors, but there’s a translucency in the bone where it’s deteriorating,” she clarified.
And she would know. In addition to her full-time job in product development at Estée Lauder, Ms. Mejia, 30, is her brother Eddy’s primary caregiver. She can rattle off his medical history as if it was her own.
“A cousin once said it’s always been me and Eddy against the world,” she said. “More than brother and sister, we’re friends.”
Raised in pre-gentrification Williamsburg, Brooklyn, as children the pair weathered the death of their Dominican-born mother. Their father was out of the picture, so they were raised by their maternal grandmother and uncle.
“Because we didn’t have any parents, we fought for each other,” she said.
In June, Mr. Mejia, 27, was taken to the hospital, too weak to leave his studio apartment in Washington Heights. A personal trainer by day, Mr. Mejia — model-handsome with a lean, muscular physique — moonlighted as a bartender, and he attributed his deepening exhaustion and persistent back pain to long hours and little sleep.
Doctors discovered that his back pain was actually spinal fractures caused by bone cancer. Ms. Mejia stayed by her brother’s side for five weeks as he underwent blood tests and a bone marrow biopsy, and, eventually, radiation and chemotherapy.
The side effects of treatment, and his reliance on a cane, keep Mr. Mejia from performing either of his two jobs. “Being a personal trainer, it’s very humbling to not be able to walk,” he said.
His personal training earnings varied from week to week, and he had little saved. He can no longer afford child support for his 5-year-old daughter, Heavana (pronounced “Havana”), of whom he and his ex-wife share custody.
It never occurred to him to ask for help when he ran out of money after his hospital admission. But his continued absence from his and Heavana’s weekly Daddy and Me cooking class at the Educational Alliance’s Head Start program caught the attention of Jeanette Diaz, a senior case manager there, who tracked him down and secured Neediest Cases funds to cover back rent, food and cab fare to doctor’s appointments.
“I wasn’t, like, with my hands out,” Mr. Mejia said. “But I wasn’t going to say no.”
(The Educational Alliance is a beneficiary of UJA-Federation of New York, one of the seven organizations that participate in the Neediest Cases Campaign.)
Despite the odds — multiple myeloma patients live an average of 29 months, though some with less advanced cases are able to manage their disease for several years — Mr. Mejia rarely loses his composure.
“I know my doctor isn’t going to steer me wrong,” he said calmly. “And my sister’s here. I’m not a spiritual guy, but I believe good things happen to good people.”
But when her brother and niece stepped onto the terrace to watch the sun set over her elegantly decorated apartment in Rego Park, Queens, Ms. Mejia allowed her grief to seep out.
“With this particular cancer, there is no Stage 4,” she said quietly. “I want to know, Is my brother going to die?”
Mr. Mejia’s doctors say it is too early to pinpoint a prognosis. But it is understood that though he may not die tomorrow, when he does die, it will probably be of multiple myeloma.
“It’s just so great that Eddy could get some help somehow, somewhere,” Ms. Mejia said, her voice catching. “It just shows that not all systems are broken.”