This is the third week in a row at Dewey's AM Fightback Friday protest and I took video of all 3 protests. I also have video of the Beach Channel meeting on Monday, another almost surreal experience.


At 3pm today Sheepshead Bay HS also held a pep rally that was awesome in the number of teachers and students who participated. The principal was the leader of the pack and was so excited she could barely contain herself.


I hope to have these videos up asap - there have been so many events, we can't keep up. GEM has reached out to both schools.


A bunch of Dewey people came to the Sheepshead protest with their Dewey banner and one teacher told a GEMer she started to cry at the support. Now Dewey may plan an afternoon protest with some reciprocity from Sheepshead.


Building unity between schools is important. If Dewey closes and Sheepshead is open they will end up with the kids from Dewey who are most difficult to place and vice versa. Of course there is one major body in this city that could being all these schools together in a massive protest but that unnamed body, which had little of no official presence at either protest, chooses to let each school fight its battles on its own.

There were also reports of some protests in Park Slope and Sunset Park but not confirmed yet.


We need more videographers out there. If you have video and want to post on the GEM or Ed Notes you tube channels let me know. You have to keep them under 10 minutes. Longer videos can go up on our channel on Vimeo.

Fighting the Closing of a High School on the Brink 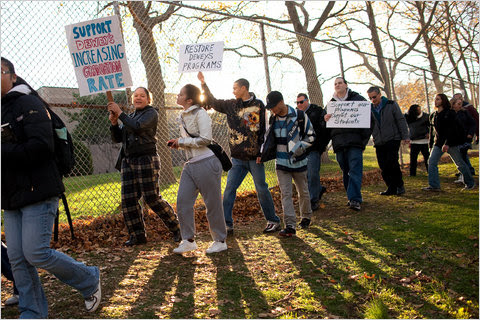 Photographs by Michael Nagle for The New York Times Supporters of John Dewey High School protest in front of the high school. This is the third week in a row of “Fight Back Friday,” a rally against a proposal to close the school.
A school bus driver honked and pumped his fist around 7:30 Friday morning, steering along Stillwell Avenue beneath the elevated D train. Outside the tree-lined campus of John Dewey High School, a swirling crowd of students, teachers and alumni cheered, many hoisting handmade signs.
The school is one of 47 city schools, including 26 high schools, that could be closed for poor performance, the Department of Education announced in October. In protest, the community has begun holding vocal weekly protests known as Fight Back Fridays.
About 150 protesters turned up two weeks ago, in the rain. On Friday morning, more than 200—including Assemblyman William Colton—rallied alongside a chain link fence outside the school.

Len Warner, who taught there for 30 years beginning in 1970, woke up at 5 a.m. to drive from Staten Island in support of the school, known for its individualized program, four-cycle school year and extended school days.
“It was nostalgic, because I drove down my old path,” said Mr. Warner, whose picket sign read: “Dewey works! Don’t let the program die.”
A group called Friends of Dewey is working on a proposal to strengthen the school, which opened in 1969. Advocates say one of the reasons Dewey’s standing has gone down is the closing of nearby schools. In its 2008-2009 progress report, Dewey received D grades in School Environment, Student Performance and Student Progress. The following year, Environment fell to an F, while Progress moved up to a C.
Dmitry Gubin, a 35-year-old student at Pratt Institute, is using John Dewey as a case study in a thesis on school closing policies. He said he wasn’t sure what effect Fight Back Fridays could have.
“It’s hard to tell,” he said, “but it’s definitely important for students to come out and feel empowered.”
Jea Sheng, a 15-year-old sophomore, said no one pressured him to march. “Why not support it?” he said, stepping out of the rotating assembly line. “I just decided to come.”
Just before 8 a.m. students headed to classes, passing through the narrow, guarded, gate and toward the school’s only entrance. As she watched, Teri Brennan, secretary of the school alumni board, recalled the spirit of “anarchy” she adopted at John Dewey, where she graduated in 1981.
“I get that the world has changed,” Ms. Brennan said, watching as students moved into the building, “but a school should never be about anything but the kids.”