BIG news: UK may turn back from high-stakes accountability system

New Conservative Ed Sec. will appoint commission to evaluate the use of high-stakes testing in UK.

Same guy who pushed this system in in UK under Labor govt, then went on to push it here in NYC and is still pushing this nationwide -- Sir Michael Barber, now at McKinsey and all-round fraud.

Article below also omits mention that one of the reason for this re-evaluation of the system was provoke by the fact that1/4 of UK teachers had their kids boycott the tests this year.

Ministers want to find out whether primary schools are drilling rather than teaching pupils. Tests for 11-year-olds could be scrapped as a result 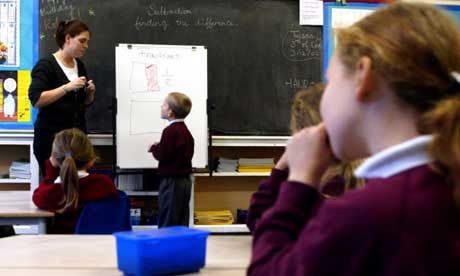 Department for Education said “too many schools believe they must drill children for tests”. Photograph: Graham Turner Ministers today ordered an inquiry into whether primary schools in England drill rather than teach their pupils. The inquiry, led by cross-bencher Lord Bew, is likely to lead to an overhaul of school league tables and could recommend that tests for 11-year-olds, known as Sats, are scrapped. Teachers have warned that the way the tables are compiled cause them to spend too much time setting pupils practice papers and concentrate on pupils who are on the border between a good and bad grade, rather than all pupils. Schools in deprived neighbourhoods argue that the league tables do not reflect the fact that they start out with disadvantaged pupils who often have lower-than-average academic records. They claim the tables humiliate children. A quarter of primary schools boycotted Sats this summer in protest at the way the results are used in league tables. The education secretary, Michael Gove, wants teachers to be more autonomous – or "free to set their own direction". The Department for Education said "too many schools believe they must drill children for tests and spend too much time on test preparation at the expense of productive teaching and learning". But Gove said parents needed to know how their local primary schools were performing. He said the Organisation for Economic Cooperation and Development had shown that this was a "key driver of improvement in education, particularly for the least advantaged". However, he said it was not the government's intention to punish schools working in difficult circumstances. The system "must be able to identify and tackle cases of sustained under-performance". "I recognise concerns from heads and teachers about the current system. The review will look at how schools can be "properly accountable" to pupils, parents and the taxpayer and how to ensure that parents have "good quality information" on their local schools. It will also look into how school league tables are used and interpreted "appropriately" and how to avoid "the risk of crude and narrow judgements". Russell Hobby, general secretary of the National Association of Head Teachers, said: "Head teachers are not against accountability, nor opposed to assessment. We are opposed to the way certain types of assessment are used to hold us accountable. It is wrong that a narrow snapshot of attainment can be used to judge the performance of a school. It is wrong that schools who do outstanding work in challenging circumstances are demeaned in league tables. And it is wrong that the education of children in primary schools is narrowed and distorted. There is a clear recognition that the nation has a legitimate interest in what is taught and how well it is taught. We just want to spend more time teaching and less time testing. We want every child to matter. And we want to be judged on how well we lead our schools, not where they happen to be located or the chance outcomes of a single day." The Department for Education would take over the administration of tests for pupils up to the age of 14, Gove said. This follows the abolition of the quango that used to do this – the Qualfications and Curriculum Development Agency. It emerged yesterday that schools made almost 23,500 appeals against this year's English and maths Sats results. The review will publish its final report by June next year.

Deliverology has severely damaged education in the UK.