AS THE SCHOOL year begins, Philadelphia School District officials face a seldom-discussed dilemma: The percentage of African-American teachers is declining, and now stands at its lowest point in decades.

And students are suffering as a result, a growing body of research shows. One national organization found that increasing the percentage of black teachers is directly related to closing the so-called achievement gap - students of color lagging behind white peers.

African-American students at George Washington Carver High School for Engineering and Science are witnesses to this erosion at their predominantly black North Philadelphia school of 650 students. 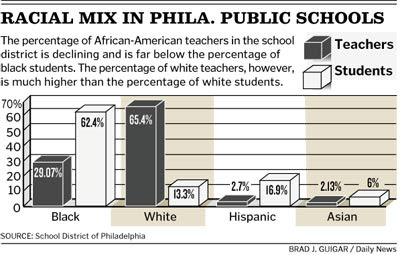 Although just five of 31 teachers are African-American at the school for high-achieving students, a popular black college-admissions adviser was abruptly transferred to another school in June, according to several Carver students who complained to the School Reform Commission at its Aug. 20 meeting.

"I want a change," senior Theodore Mason said in an interview following the meeting. "How can you take away the only black counselor that we have?"

Carver's teachers, said senior Maurice Nelson, "don't meet our needs, because African-American teachers can reach out more to the students. The ones we do have are more down-to-earth with us. They tell us things that we need to know, and they don't sugarcoat anything."

Diversity advocates say that the situation has reached a point where the continued loss of black teachers has made it impossible for the district to achieve a racially balanced teaching force - a stipulation of a 30-year-old agreement with the federal Office of Civil Rights.

In 1978, when that agreement took effect, 36 percent of the district's teachers were black. Today, the figure has declined to 29 percent, the district says.

At the same time, the percentage of black students in the public schools has remained relatively stable at more than 60 percent.

To be sure, the trend is not confined to Philadelphia. Other school districts across the country also are grappling with declining numbers of black teachers while the number of students of color is increasing.

But in Philadelphia, this decade has been a time of precipitous decline in the numbers of black teachers. Of the district's 10,482 teachers, the 29 percent who are black represents a nearly 2.5 percent drop from 2003, when black teachers comprised 32.4 percent of the work force. In the last five years, the number of black teachers has dropped by 739.

Meanwhile, the percentage of white teachers has been growing. Whites represent 65.4 percent of the district's teachers, a jump from 62.5 percent in 2003 - while only 13.3 percent of the student population is white.

"Clearly, more must be done to recruit and retain African-American teachers," said Jerry Jordan, president of the Philadelphia Federation of Teachers (PFT).

An analysis by the National Collaborative on Diversity in the Teaching Force found that increasing the percentage of teachers of color in classrooms is directly connected to closing the achievement gap.

"While race doesn't determine anyone's ability to master and teach a subject, research does show that teachers of color have higher performance expectations for minority kids, which in turn can impact student achievement," Reg Weaver, president of the National Education Association, says on the NEA Web site.

Experts say that the number of black teachers is declining for various reasons, including higher pay in other school districts and in other professions.

Black enrollment in the College of Education dropped from 17 percent in 2005 to 12 percent last year, he said.

The federal No Child Left Behind Act - which requires teachers to pass certification exams to keep their jobs - has abetted the decline in black teachers, a growing number of educators believe.

Although the district and the state Department of Education could not provide local numbers, the Educational Testing Service says that among African-American teacher candidates nationally, 69 percent are passing the certification tests, compared with 91 percent of white candidates.

Some observers say that the Philadelphia district must redouble its efforts to find qualified African-American teachers.

"We have started some things, but not nearly enough," said Sandra Dungee Glenn, chairwoman of the district-governing School Reform Commission.

Diversity efforts, she said, include: urban-educator academies in the Overbrook and Parkway West high schools, which expose students to the teaching profession; strong relationships with the historically black Lincoln and Cheyney universities; and participation in "Call Me Mister," a national teacher-recruiting program.

Ironically, some observers believe that the district's racial-balancing policy is exacerbating the black-teacher shortage.

The idea behind the policy is for the relatively low number of black teachers to be distributed evenly across the city.

In practice, that means that black teachers at a high school cannot exceed 35 percent of the school's teachers.

Simmons, who for five years has worked to improve the school as head of the Germantown Clergy Initiative, said that Dempster told him that he had to turn away two African-American male teachers seeking to fill vacancies because the school already had reached its 35 percent limit.

"That's criminal, at a school where we desperately need African-American male teachers," Simmons said of Germantown High, where 98 percent of the students are black.

"I don't know how you can logically think 35 percent is racial balance when you are turning down African-American teachers," he said. "I question the wisdom in this, and the motivation. It works out like a jobs plan for non-African-Americans."

Dempster did not return several calls from the Daily News seeking comment.

Molefi Kete Asante, senior professor of African-American studies at Temple University, called the policy a "quota system" and said it does harm when it stops qualified black teachers from teaching black students.

"In a situation where the majority of the student population is African-American, it is almost obscene that you have this prescription that you cannot have more than 35 percent black teachers," said Asante, author of more than 60 books and a leading scholar of African history.

Glenn, of the reform commission, said that she also is concerned about the policy and will push to have it re-examined.

"How this policy needs to look in 2008 is probably very different than it needed to look in 1978," she said. "I don't think that we have . . . really looked at whether it is meeting our needs now."

The old Philadelphia Board of Education adopted the policy in 1978 after federal officials threatened to withhold student-desegregation aid, concluding that the district's teacher-assignment policies amounted to de facto segregation.

Although the racial-balancing agreement formally ended in 1982, both the district and the teachers' union have voluntarily kept the policy.

Based on the fact that 28 percent of the district's high-school teachers are black, each high school's teaching staff can have between 22.4 percent and 35 percent black teachers this year.

At the district's middle schools, where 33 percent of teachers are black, schools can have between 24.7 and 41.2 percent black teachers.

At the elementary schools, where 29 percent of teachers are black, black teachers can comprise between 21.7 percent and 36.2 percent of the total.

The PFT's Jordan, who supports the racial-balancing policy, said that it helps prevent teaching staffs from becoming more racially lopsided.

"It is really important to have a variety of teachers from different ethnic backgrounds teaching our children, rather than one ethnic group," Jordan said, "because children need to experience what they will see in the general population."

Temple's Asante, however, said that principals should be allowed to decide if they want to use the policy.

At predominantly black schools, he believes, some principals would opt to have staffs that better reflect their students.

"When you have a system like Philadelphia, where you have such a strong percentage of black children, it is almost criminal if you don't provide them with black teachers who could be good role models for them," Asante said.

"That rule may have had some relevance when it was instituted, but when you have 99 percent black children at a school, you need a far larger number of black teachers."

Great article. This problem of vanishing teachers of color is happening all over the United States.
Let's take P.S. 314 (now P.S.506 and P.S. 503) in Sunset Park, Brooklyn N.Y. where 80% percent of the children are hispanic and they have 90% percent of white teachers. Where are all the Hispanic or black teachers? They have been kicked out from the school under the BloomKlein control.