The Ugly the Bad and the Ugly of Corporate Reform 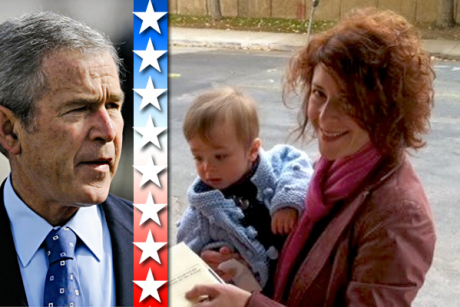 Left: George W. Bush. Right: The author's wife holds their son as she mails her ballot for the election.  (Credit: AP/Courtesy of the author)

Topics:Campaign Finance, Real Families
Before it happens, it’s hard to know how you’ll feel when you see a slickly produced, oil-CEO-financed flier implicitly attacking your 11-month-old baby for not being old enough to attend school and explicitly criticizing your family for not being able to afford a home.
It sounds like a takeoff of “SNL’s” hilarious “bat problem” campaign ads — something so over-the-top it couldn’t possibly be real. But, in our case, it wasn’t a parody — such a mailer now fills up thousands of mailboxes throughout my town. And unfortunately, I now know how badly I feel in the face of such a barrage. I’m not overwhelmed by anger or vengefulness. Instead, I’m experiencing a far more numbing set of emotions: a mix of sadness and helplessness.
Six months ago, when my wife, Emily, decided to run for a school board seat here in Southeast Denver, I was (perhaps naively) expecting what we used to get from the most local of local races for such part-time, unpaid positions: lots of door knocking, a few yard signs, maybe a barbecue or two — all the wholesome activities that were once staples of local political Americana.

David Sirota is a best-selling author of the new book "Back to Our Future: How the 1980s Explain the World We Live In Now." He hosts the morning show on AM760 in Colorado. E-mail him at ds@davidsirota.com, follow him on Twitter @davidsirota or visit his website at www.davidsirota.com.  More David Sirota