Charter Resistance in Bill Gates' Own Back yard

WA has so far managed to resist the charter school push, despite the free-spending ways of the Gates foundation headquartered in the state, and now Gates is also helping to fund the Washington PTA, which is supporting a new bill that would establish charters for the first time in the state.

I'll be speaking in Seattle on November 17 to teachers and public; on November 18 to leaders of Washington Education Assn; and on November 19 to Washington School Directors Assn (the state school boards). They will get an earful.

Written by Dan Trocolli, a  Seattle Teacher and  member of Social Equality Educators

I started my Saturday morning going to the Washington State Parent Teacher Association (PTA) Legislative Assembly to assist parents in Parents Across America-Seattle, an activist group of parents, in opposing charter school legislation in the state of Washington.  It wasn’t easy waking up at 6:00 AM on a Saturday, but I knew it was important that people know the negative effect that charter schools can have on our public schools.
As a teacher, one would think that parents in the PTA would be very interested in hearing from teachers about significant changes to Washington laws on delivering public education to their children, particularly given the fact that teachers are underrepresented in PTA’s around the country.  Imagine my shock when approaching a group of parents in the hotel lobby with flyers,  one woman tore the flyers  out of my hand  in a hysterical rage then went up to my colleague, another teacher, and ripped the flyers from her hands as well and then threw them in the trashcan!
I wanted to let delegates in the PTA know how charters have a higher teacher turnover, unfairly exclude under-performing students and siphon money from other public schools.  However, we were unable to continue handing out flyers and talking to parents about a teachers’ perspective on charter schools.  The president, vice president and executive director of the state PTA all tried to assure us that they would consider approving the flyer for distribution.  Never mind that the debate and vote was set to occur in mere minutes.
Turns out the PTA voted to support legislation in Washington for the creation of charter schools passed by a mere 9 votes, despite the PTA’s own survey of members that found a majority opposed to bringing charters to our state.  In fact, the influence of corporate, pro-charter forces, such as Stand For Children, on the top echelons of the Washington State PTA caused them to not provide delegates any information critical of charters, at all.
The outcome was difficult to face given the attacks on public education these days.  However, my disappointment was short-lived as I made my way to Occupy Seattle.  There was an immediate contrast of the undemocratic repression I experienced at the PTA convention with the people’s democracy of the occupation’s rally and march. 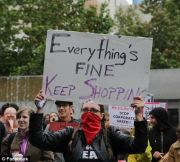 The rally at Westlake Plaza, part of an international day of action in solidarity with Occupy Wall Street, was already in the thousands when I got there.  Teachers in the Social Equality Educators (SEE), a rank and file group of educators in Seattle, gathered in a contingent.  We had a table with a sign-up for union members and labor supporters of the occupation.  We displayed our banner, “Bail out Schools, Not the Banks!” and answered questions of protestors visiting our table.
There were people discussing all sorts of political questions all over the square, including, among other things, charter schools.  Various groups had tables where they distributed all sorts of propaganda on issues like corporate greed, the war in Afghanistan and socialism.  And individual protestors had many myriad homemade signs raising many social issues as well. 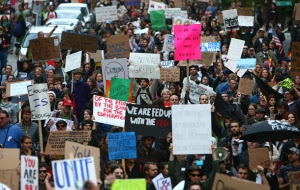 But this was just the beginning.  On the march protestors stopped and occupied for some moments the Pike Place Market intersection.  When an ambulance neared unable to get through, protestors needed no instructions and immediately parted to let them through chanting, “This is what Democracy looks like.” 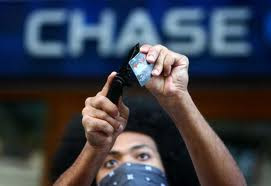 When the march neared the plaza, SEE members organized an impromptu sit-in in front of the CHASE bank across the street.  Thousands sat in the street, the sidewalks and the plaza listening as teachers and community members sounded off on corporate greed and what it will take to curtail it.
Later protestors re-occupied Westlake Plaza with over a hundred tents.  The sense that it is possible to make the change we want to see in the world was palpable and that solidarity with one another is key in making that change happen.  Most people coming to the occupation had a healthy rejection of free market, corporate driven solutions to public ills such as charter schools.
Like the Occupiers, most teachers recognize the undue influence of the uber-wealthy 1% on school reforms such as charter schools and merit pay.  It’s these changing winds that might be frustrating the angry woman of the PTA.
The PTA leadership should take a lesson and hold their Legislative Assembly down at Westlake Plaza.  They may learn a thing or two from the other 99% about democracy and what’s needed to improve public education.
Posted by ed notes online at Wednesday, October 19, 2011