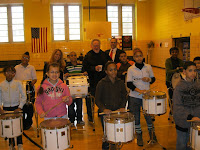 “I was deeply moved by the hospitality shown by Principal Brian DeVale and his staff and tremendously impressed by the dedication and talent of the teachers at the school,” said Naison, who was invited to visit to school as a result of an article he wrote, “In Defense of Public School Teachers."

During his visit, Naison visited several classes and ate lunch with the School Leadership Team. He also attended a ballroom dancing class and a performance by the school's drum line.

“It was incredible,” he said. “The students made a tremendous impression on me. The school resembled many of the wonderful schools in the Bronx I visited when I was doing Oral History training for teachers. The children were happy, energetic, intellectually curious and quite astonished to see an old white man rap!”

“What a great day this was,” he said. “It reinforced my determination to speak out on behalf of some of the most talented and dedicated public servants in our nation—our public school teachers.”
Posted by ed notes online at Saturday, January 22, 2011