Klein Loses On a Charter

Under political pressure, Chancellor Joel Klein has backed off his vow to allow a charter school to expand inside a public school on the Lower East Side, another indication that the chancellor's powers were weakened when the mayoral-control law was renewed last year.
Mr. Klein's retreat means that the 125 fifth- and sixth-graders at Girls Prep Middle School won't start classes on Monday in the P.S. 188 building as planned. Instead, teachers have stopped setting up classrooms and the school's staff and board members—among them Wall Street investors—are scrambling to find private space for the girls. 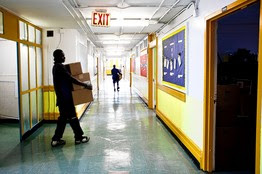 Bryan Derballa for The Wall Street Journal
Deliverymen drop off textbooks to Girls Prep, which must move.
Mr. Klein's strategy of promoting the proliferation of charter schools by giving them space inside current school buildings has inspired vocal opposition from politicians and communities. In renewing Mayor Michael Bloomberg's control over the schools last year, the state Legislature increased the requirements of the city's Department of Education to provide specific information to community members about the effects on students when the DOE alters space usage inside schools.

This spring, the courts killed the mayor's plans to close 19 failing schools, saying the agency didn't provide sufficient data about the impact the closures would have on students and the community. The DOE has vowed to try again next year.

In the case of Girls Prep, advocates for special-education students from P.S. 94 who are taught in the building—which also houses P.S. 188—filed a complaint regarding the DOE's plans to let the charter school grow, alleging that the department failed to adequately explain the effects on the P.S. 94 students, most of whom are autistic. The DOE noted that not a single special-education student would be moved under its plan, and that the building had more than adequate space to accommodate all students.

The state's education commissioner two weeks ago sided with the special-education advocacy group that filed the case on behalf of parents, Advocates for Children. In his ruling, the commissioner seemed to invite the chancellor to move forward anyway: "Nothing herein shall be construed as preventing the chancellor from determining that the DOE's proposal is immediately necessary for the preservation of student health, safety or general welfare, and from invoking the emergency provisions" afforded by the law.

When the chancellor suggested last week that he would use those very powers so that Girls Prep could expand to the sixth grade, as planned, elected officials voiced opposition. In the past few days, Mr. Klein has backed off, "given the threats of litigation and continuing uncertainty," he said in a statement.

A spokeswoman for the DOE, Natalie Ravitz, said Friday that the department still hasn't ruled out the use of the "emergency" declaration. "We still believe that PS 188 is an appropriate option as they have adequate space available and it would not result in a single special-education student being moved," she said in a statement. "But if we can identify alternative space for one year—whether private or public—we feel it would be the best outcome for all involved."

Rebecca Shore, director of litigation at Advocates for Children, said the chancellor's retreat "is a positive step" and that she has "complete sympathy for the students at Girls Prep." But she stressed that her group "did not create this situation. This is something that the DOE did on its own by failing to follow the law." She said that parents of special-education students in the building and parents of those whose children may have attended school in the building still don't know where their children will be placed.

Teachers at Girls Prep have been working since July to prepare for the girls, who attend school between 8 a.m. and 5 p.m. and sometimes Saturdays. Intensive tutoring and home visits by teachers are part of the culture of the college-prep school, said the principal, Kim Morcate. The girls are mainly black, Hispanic and poor. Some live in homeless shelters; many live in public housing near the school.

On Friday evening, the principal faced the girls' parents to tell them that school won't start on Monday. "It's painful, honestly," Ms. Morcate said. "Our parents have been through a lot." But she said she is confident that the staff and the teachers could make up for the delay in the school's opening. "We are a school that is providing an excellent education for our girls," she said.

If any 188 staff member feels this is a victory, it is only temporary. Even if Girl's Prep's middle school finds a one year temp home, I believe the wrath of Joel Klein will be felt by 188 throughout the year through budget, how the reading and math scores are played up, etc. 188 is already seeing a lose of about 6 staff members due to cuts. Just like the 19 schools slated for closure have received a one year stay with "support", the 2011-2012 school year will have Klein and Bloomberg getting what they want.