New data show that fewer than 25% of 2010 graduates who took the ACT college-entrance exam possessed the academic skills necessary to pass entry-level courses, despite modest gains in college-readiness among U.S high-school students in the last few years.
The results raise questions about how well the nation's high schools are preparing students for college, and show the challenge facing the Obama administration in its effort to raise educational standards. The administration won bipartisan support for its education policies early on, but faces a tough fight in the fall over the rewrite and reauthorization of the No Child Left Behind program. 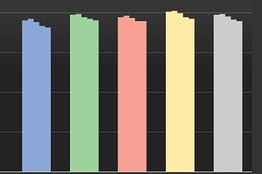 Take a look at how prepared the class of 2010 is for college.

While elementary schools have shown progress on national achievement exams, high-school results have stayed perniciously low. Some experts say the lack of rigor in high-school courses is partly to blame.
"High schools are the downfall of American school reform," said Jack Jennings, president of the Center on Education Policy, a nonpartisan research organization in Washington. "We haven't figured out how to improve them on a broad scope and if our kids aren't dropping out physically, they are dropping out mentally."
President Barack Obama has said the nation's long-term prosperity depends on fixing the nation's high schools and preparing students to compete in a global economy. A recent study found the U.S. ranks only 12th in the percentage of adults aged 25 to 34 who hold college degrees, and Mr. Obama has set a goal of becoming No. 1.
To accomplish its aims, the administration will need to finesse the co-operation of the powerful teacher's unions, Congress, parents and local school officials—groups that aren't always on the same page when it comes to education reform.
Support for the administration's reforms has fractured in recent weeks. The Democratic party is fiercely divided over education policy; the nation's largest teacher's union passed a vote of no-confidence in the education reforms; and civil-rights groups have charged that the administration isn't doing enough to help minority children.
In the recent results, only 24% of the graduating class of 2010 scored high enough on the ACT in math, reading, English and science to ensure they would pass entry-level college courses. This is a slight uptick from last year, when 23% were ready for college, and from 2008, when 22% were ready.
Still, 28% of students didn't score high enough on even one subject-matter exam to ensure college readiness.
The ACT is taken by students in every state but is most popular in the Midwest. About 47% of the 2010 graduating class, 1.6 million students, sat for the exam, which is accepted at most U.S. colleges. The ACT is an achievement test that measures students' mastery of high-school curriculum and the skills they'll need to pass first-year college courses.
The average ACT composite score has actually fallen since 2007, after increasing during the five-year period before that. This year, the average composite was 21.0, compared with 21.1 last year and 21.2 in 2007. The test is scored on a 1-36 point scale.
ACT officials say a more diverse test-taking population partly explains the less-than-stellar results. African-American and Hispanic students made up 24% of the test-taking pool this year, compared with about 19% four years ago. African-American and Hispanic students generally post lower scores than their white and Asian counterparts.

But ACT officials and national experts say a weakened high-school curriculum is also at fault. The testing data show that even when students take a core curriculum—defined as four years of English and three years each of math, science and social studies—they aren't likely to be college-ready.
About 70% of students who sat for the ACT took a core curriculum in high school, but only 29% met college-readiness standards on all four subject exams.
"This is very appalling," said Cynthia Schmeiser, ACT's Education Division president and chief operating officer. "It suggests that the core courses they are taking are not sufficient to prepare them for what they will face in college or the work force."
Despite a decade of high-school reform efforts, including breaking larger high schools into smaller ones and pushing more students into college-prep courses, there is still no solid evidence on how best to boost achievement.
Five years ago, only 54% of ACT test takers said they were enrolled in a core curriculum, compared with 71% this year.
John Harris, director of the National High School Center at the American Institutes for Research, a nonprofit research organization, said high schools, traditionally, were good at preparing a select group of students for college. But as low-skill jobs disappeared in the global economy, more students migrated from shop and home economics to the core curriculum.
"We have a conflict where we are trying to increase the rigor and push kids to learn more, yet we try to do all of this in the same 180 days, 40-50 minute classes we've always had," he said. "High schools are still very traditional institutions."
Susan Traiman, public policy director for the Business Roundtable, called the mismatch between the core curriculum and the test scores "false advertising" by high schools. She also noted that the results spell trouble for businesses.
"From these scores, it is clear we are facing a terrible situation when the economy rebounds," said Ms. Traiman, whose group includes the chief executives from the biggest U.S. companies. "We know that companies will start hiring again and they won't be able to grow without a pool of potential employees who have basic entry-level skills."