On May 28th of this session (this is how I think…in session…not in session) the Senate voted to lift the cap on the Charter Schools in New York which will lift the cap for Wall Street to continue to make money from our citizens in the name of “school reform.” With all the issues concerning Charter Schools, with the City of Albany taxed beyond its limit to sustain two school systems, one open and accountable the other secretive, sparsely populated, ethically challenged with a questionable mission.

Now, sure, the Guv still needed to sign the bill, and the Assembly, which I had thought was on lock down with Shelly Silver hanging tight with the unions, still needed to vote on the bill. But, still, when the cantankerous folks in the upper chamber voted to lift the cap on Charters, I got a little worried about the future. My worries were warranted.

The other day I heard about a guy named Steve Bahar. Seems that Steve was running for the Assembly down in Queens against Assemblywoman Carrozza…he was anti-charter school expansion. (Seems they have many of the same issues in the city that we have in Albany!! Can you imagine?) When Steve was gaining on Carrozza he got a call from a couple of Charter “bundlers.” What’s a bundler? Why, I’m so glad you asked.

A bundler is, essentially, a lobbyist who can deliver funds to candidates which are not easily tracked back to the donors and are not easily attached to the candidate. Interesting news, I hear there is a new database which will track “bundling” though it’s not yet searchable.

So, back to Bahar. Seems he gets these calls and the bundlers offered to “bundle” $100,000 to $200,000 for him if he changed his stance on Charter School expansion and joined the Wall Street savvy pushing for lifting the cap in development of more Charters. Of course, he turned them down but didn’t provide the names of the bundlers for fear of scaring off future donors to his campaign.

So, I got to thinking about the recent vote in the Senate which brought me such disappointment in my favorite of chambers. So, I pulled the list of those who support charter schools and I researched donations provided to our electeds (and opponents) from known supporters of Charter School Expansion. Contributors researched include: Democrats for Education Reform, Whitney Tilson, Anthony Davis, Boykin Curry, Coalition for Public Charter Schools, the Waltons (Walmart, Walton Family Foundation…biggest funder of Brighter Choice), Brian Meara, Joel Greenblatt and a little bit of Lynch…of course.

Those Senators who consistently voted in support of charter school expansion is listed here along with the contributions they accepted (besides the ever popular but untraceable bundling) here.

I also extracted much of the history of “contributions” to our legislators, potential legislators and our governor. See those contributions here. Wanna know how much it costs (on the books…wink, wink) to buy the Senate? Here ya go…$302,600. The largest pricetags for their support belong to Craig “Mr. Honest” Johnson… $52,400, Kevin Parker….$26,800, Jeff “Pay to Play” Klein…$28,950, freshman Senator Daniel “fast learner” Squadron…$34,000 and our fearless leader Malcolm Smith’s pricetag this time…$35,000. Perhaps Eric “show me the money” Adams should get some pointers from his cohorts he only got $5000 for his vote.

Now, I didn’t even take a glance at what money changed hands with these “supporters” over in the Assembly but you can if you just look up your favorites right here. Now, we all know that this expansion wouldn’t fly through without the support of the governor, right? I mean, he’s the man with the “plan” down at the cap, right? Wanna know his pricetag for just this one little lifting of the charter school cap? Remember, this is just the money he’s accepted “on the books” from these Charter School supporters over the years…(not counting the funds his Lt. Guv campaign)…$169,400.

We don’t need more Education Reform (read that with sarcasm: Charter Schools) we need government reform…we need the Citizens to regain their voice in this State. 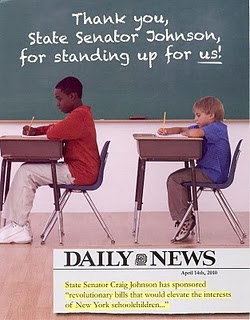