Cowan and Kessler: Economic Populism Is a Dead End for Democrats

By
Jon Cowan And
Jim Kessler
If you talk to leading progressives these days, you'll be sure to hear this message: The Democratic Party should embrace the economic populism of New York Mayor-elect Bill de Blasio and Massachusetts Sen. Elizabeth Warren. Such economic populism, they argue, should be the guiding star for Democrats heading into 2016. Nothing would be more disastrous for Democrats.
While New Yorkers think of their city as the center of the universe, the last time its mayor won a race for governor or senator—let alone president—was 1869. For the past 144 years, what has happened in the Big Apple stayed in the Big Apple. Some liberals believe Sen. Warren would be the Democratic Party's strongest presidential candidate in 2016. But what works in midnight-blue Massachusetts—a state that has had a Republican senator for a total of 152 weeks since 1979—hasn't sold on a national level since 1960.
The political problems of liberal populism are bad enough. Worse are the actual policies proposed by left-wing populists. The movement relies on a potent "we can have it all" fantasy that goes something like this: If we force the wealthy to pay higher taxes (there are 300,000 tax filers who earn more than $1 million), close a few corporate tax loopholes, and break up some big banks then—presto!—we can pay for, and even expand, existing entitlements. Meanwhile, we can invest more deeply in K-12 education, infrastructure, health research, clean energy and more.
Social Security is exhibit A of this populist political and economic fantasy. A growing cascade of baby boomers will be retiring in the coming years, and the Social Security formula increases their initial benefits faster than inflation. The problem is that since 2010 Social Security payouts to seniors have exceeded payroll taxes collected from workers. This imbalance widens inexorably until it devours the entire Social Security Trust Fund in 2031, according to the Congressional Budget Office. At that point, benefits would have to be slashed by about 23%.
Enlarge Image 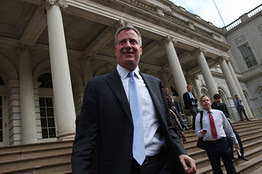 New York City Mayor-elect Bill de Blasio Getty Images
Undeterred by this undebatable solvency crisis, Sen. Warren wants to increase benefits to all seniors, including billionaires, and to pay for them by increasing taxes on working people and their employers. Her approach requires a $750 billion tax hike over the next 10 years that hits mostly Millennials and Gen Xers, plus another $750 billion tax on the businesses that employ them.
Even more reckless is the populists' staunch refusal to address the coming Medicare crisis. In 2030, a typical couple reaching the eligibility age of 65 will have paid $180,000 in lifetime Medicare taxes but will get back $664,000 in benefits. Given that this disparity will be completely unaffordable, Sen. Warren and her acolytes are irresponsibly pushing off budget decisions that will guarantee huge benefit cuts and further tax hikes for Gen Xers and Millennials in a few decades.
As for the promise that unrestrained entitlements won't harm kids and public investments like infrastructure, public schools and college financial aid, haven't we seen this movie before? In the 1960s, the federal government spent $3 on such investments for every $1 on entitlements.
Today, the ratio is flipped. In 10 years, we will spend $5 on the three major entitlement programs (Social Security, Medicare and Medicaid) for every $1 on public investments. And that is without the new expansion of entitlement benefits that the Warren wing of the Democratic Party is proposing. Liberal populists do not even attempt to address this collision course between the Great Society safety net and the New Frontier investments.
On the same day that Bill de Blasio won in New York City, a referendum to raise taxes on high-income Coloradans to fund public education and universal pre-K failed in a landslide. This is the type of state that Democrats captured in 2008 to realign the national electoral map, and they did so through offering a vision of pragmatic progressive government, not fantasy-based blue-state populism. Before Democrats follow Sen. Warren and Mayor-elect de Blasio over the populist cliff, they should consider Colorado as the true 2013 Election Day harbinger of American liberalism.
Mr. Cowan is president of the think tank Third Way, where Mr. Kessler is senior vice president for policy.
Posted by ed notes online at Wednesday, December 11, 2013