The limits of anti-racism

Home Mail Articles Supplements Subscriptions Radio
The following article appeared in Left Business Observer #121, September 2009. Copyright 2009, Left Business Observer.
Like this? Subscribe today! There’s a lot more where this comes from—and only some of it makes it to the web for free consumption.
The limits of anti-racism by Adolph Reed Jr.

Antiracism is a favorite concept on the American left these days. Of course, all good sorts want to be against racism, but what does the word mean exactly?
The contemporary discourse of “antiracism” is focused much more on taxonomy than politics. It emphasizes the name by which we should call some strains of inequality—whether they should be broadly recognized as evidence of “racism”— over specifying the mechanisms that produce them or even the steps that can be taken to combat them. And, no, neither “overcoming racism” nor “rejecting whiteness” qualifies as such a step any more than does waiting for the “revolution” or urging God’s heavenly intervention. If organizing a rally against racism seems at present to be a more substantive political act than attending a prayer vigil for world peace, that’s only because contemporary antiracist activists understand themselves to be employing the same tactics and pursuing the same ends as their predecessors in the period of high insurgency in the struggle against racial segregation. 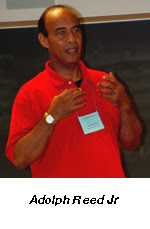 This view, however, is mistaken. The postwar activism that reached its crescendo in the South as the “civil rights movement” wasn’t a movement against a generic “racism;” it was specifically and explicitly directed toward full citizenship rights for black Americans and against the system of racial segregation that defined a specific regime of explicitly racial subordination in the South. The 1940s March on Washington Movement was also directed against specific targets, like employment discrimination in defense production. Black Power era and post-Black Power era struggles similarly focused on combating specific inequalities and pursuing specific goals like the effective exercise of voting rights and specific programs of redistribution.
Clarity lost
Whether or not one considers those goals correct or appropriate, they were clear and strategic in a way that “antiracism” simply is not. Sure, those earlier struggles relied on a discourse of racial justice, but their targets were concrete and strategic. It is only in a period of political demobilization that the historical specificities of those struggles have become smoothed out of sight in a romantic idealism that homogenizes them into timeless abstractions like “the black liberation movement”—an entity that, like Brigadoon, sporadically appears and returns impelled by its own logic.
Ironically, as the basis for a politics, antiracism seems to reflect, several generations downstream, the victory of the postwar psychologists in depoliticizing the critique of racial injustice by shifting its focus from the social structures that generate and reproduce racial inequality to an ultimately individual, and ahistorical, domain of “prejudice” or “intolerance.” (No doubt this shift was partly aided by political imperatives associated with the Cold War and domestic anticommunism.) Beryl Satter’s recent book on the racialized political economy of “contract buying” in Chicago in the 1950s and 1960s, Family Properties: Race, Real Estate, and the Exploitation of Black Urban America, is a good illustration of how these processes worked; Robert Self’s book on Oakland since the 1930s, American Babylon, is another. Both make abundantly clear the role of the real estate industry in creating and recreating housing segregation and ghettoization.
Tasty bunny
All too often, “racism” is the subject of sentences that imply intentional activity or is characterized as an autonomous “force.” In this kind of formulation, “racism,” a conceptual abstraction, is imagined as a material entity. Abstractions can be useful, but they shouldn’t be given independent life.
I can appreciate such formulations as transient political rhetoric; hyperbolic claims made in order to draw attention and galvanize opinion against some particular injustice. But as the basis for social interpretation, and particularly interpretation directed toward strategic political action, they are useless. Their principal function is to feel good and tastily righteous in the mouths of those who propound them. People do things that reproduce patterns of racialized inequality, sometimes with self-consciously bigoted motives, sometimes not. Properly speaking, however, “racism” itself doesn’t do anything more than the Easter Bunny does.
Yes, racism exists, as a conceptual condensation of practices and ideas that reproduce, or seek to reproduce, hierarchy along lines defined by race. Apostles of antiracism  frequently can’t hear this sort of statement, because in their exceedingly simplistic version of the nexus of race and injustice there can be only the Manichean dichotomy of those who admit racism’s existence and those who deny it. There can be only Todd Gitlin (the sociologist and former SDS leader who has become, both fairly and as caricature, the symbol of a “class-first” line) and their own heroic, truth-telling selves, and whoever is not the latter must be the former. Thus the logic of straining to assign guilt by association substitutes for argument.
My position is—and I can’t count the number of times I’ve said this bluntly, yet to no avail, in response to those in blissful thrall of the comforting Manicheanism—that of course racism persists, in all the disparate, often unrelated kinds of social relations and “attitudes” that are characteristically lumped together under that rubric, but from the standpoint of trying to figure out how to combat

even what most of us would agree is racial inequality and injustice, that acknowledgement and $2.25 will get me a ride on the subway. It doesn’t lend itself to any particular action except more taxonomic argument about what counts as racism.
Do what now?
And here’s a practical catch-22. In the logic of antiracism, exposure of the racial element of an instance of wrongdoing will lead to recognition of injustice, which in turn will lead to remedial action—though not much attention seems ever given to how this part is supposed to work. I suspect this is because the exposure part, which feels so righteously yet undemandingly good, is the real focus. But this exposure convinces only those who are already disposed to recognize.
Those who aren’t so disposed have multiple layers of obfuscating ideology, mainly forms of victim-blaming, through which to deny that a given disparity stems from racism or for that matter is even unjust. The Simi Valley jury’s reaction to the Rodney King tape, which saw King as perp and the cops as victims, is a classic illustration. So is “underclass” discourse. Victimization by subprime mortgage scams can be, and frequently is, dismissed as the fault of irresponsible poor folks aspiring beyond their means. And there is no shortage of black people in the public eye—Bill Cosby and Oprah Winfrey are two prime examples, as is Barack Obama—who embrace and recycle those narratives of poor black Americans’ wayward behavior and self-destructive habits.