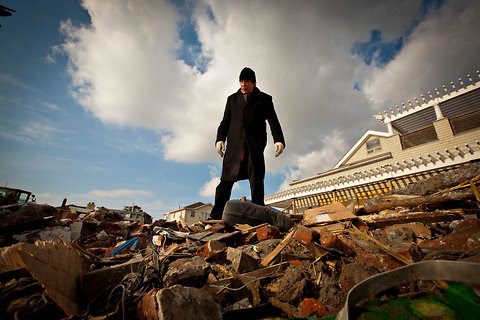 Ángel Franco/The New York Times Kenny Vance, the singer, songwriter and music producer, at the ruins of his home in Belle Harbor, Queens. Many of his possession were destroyed or washed away.
In the 38 years since Kenny Vance moved into his oceanfront home at the end of Beach 137th Street in the Rockaways, the house became a repository of his half-century musical career as a singer, songwriter and producer.
“It was my little museum,” said Mr. Vance, 68, an original member of Jay and the Americans, which was an opening act for the Beatles and the Rolling Stones, and the musical director behind many prominent films and television shows, including “Saturday Night Live.”
Over the years, he improved the modest beach house in the Belle Harbor section of Queens into a comfortable two-story refuge of rejuvenation that enabled him to keep a busy performance schedule. 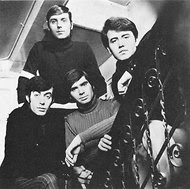 Kier Clockwise from top: Sandy Yaguda, Jay Black, Marty Sanders and Kenny Vance of Jay and the Americans.
“I weathered all the storms — never even got a drop of water in my basement,” said Mr. Vance, who would write and record music and rehearse with his band in his basement studio.
Then came Hurricane Sandy, which drove the ocean through the streets of Belle Harbor and pulverized his house while he was away performing on a cruise ship. He returned to find his house reduced to rubble.
“After the hurricane, a friend called and asked if I got water in the basement, and I said, ‘I don’t have a basement anymore,’” Mr. Vance said. “It was beyond recognition. My whole reality didn’t exist anymore.”
His possessions reduced to the luggage he took on the cruise and his car, he was placed by federal officials in a Hampton Inn on Staten Island, and has spent his days visiting the remains of his house to sift through the sand for the rare photograph or recording that might be intact and worth saving.
So far, he has barely filled half of his car trunk.
On Wednesday, he watched a backhoe fill a dump truck with pieces of his home and its ruined contents.
Somewhere in that debris might have been shards or more of early vinyl recordings of the Harbor Lites, a doo-wop group in which Mr. Vance began his professional career in the late 1950s, at age 15, in his native Brooklyn.

Ángel Franco/The New York Times Some remnants from Mr. Vance’s home.
And maybe remnants of 45-r.p.m. records with hits like “She Cried” and “Cara Mia” from Mr. Vance’s next group, Jay and the Americans. Possibly photographs of him with the Rolling Stones and the Beatles, when the groups first played in the United States.
“I was saving all this stuff to, one day, put into a book,” he said.
Gone was the shirt he wore in “American Hot Wax,” the film in which he appeared as a bandleader and for which he produced the soundtrack.
And now in the sand was a bulky roll of two-inch audio tape: the master recording of the “Animal House” soundtrack, which Mr. Vance also produced.
“I had a tape of John Belushi singing a dirty version of ‘Louie Louie,’ which no one will ever hear now,” said Mr. Vance, who was musical director for “Saturday Night Live” in the early 1980s. The backhoe scooped up a poster of Kenny Vance and the Planotones, his current group.
One item not in the pile was his upright piano.
“They found it up on the boulevard,” he said, referring to Rockaway Beach Boulevard. He used to keep the piano in the Brill Building in Manhattan, a hive of songwriting activity when Mr. Vance had an office there in the 1960s. Once, he said, an unknown songwriting duo — Walter Becker and Donald Fagen, who would later form the band Steely Dan — used the piano to audition songs for him in 1967.
There in the sand were pieces of a drum set, and a half-buried kitchen blender. “Oh man, my juicer,” he said, picking up the blender.
Nearby was half of a 45 disc of “Looking for an Echo,” a Vance hit. And there was a sand-encrusted cassette tape of his own compositions with the handwritten label “7 Songs.” “I have no idea what it is,” he said.
Mr. Vance kept his 12 vintage guitars on the first floor, where he thought they would be safe. They were not.
He had homeowner’s and flood insurance, he said, but “I still have no idea what’s going to happen. There is so much bureaucracy to go through.”
The house was where he gathered with his children and grandchildren, and where he rehearsed his latest album, a Christmas-themed offering called “Mr. Santa.”
But Mr. Vance, who is divorced, has not let what has happened stop him from performing. He has a show scheduled Saturday in Red Bank, N.J.
“Performing is my medicine,” he said, adding that his most poignant find in the wreckage was a photograph of him performing with the singer Johnny Maestro, who died in 2010.
“I cried when I found that,” he said. “I realized that I’m lucky, because I’m still here.”
Posted by ed notes online at Wednesday, December 05, 2012