Proud to Be Part of The Wave Team 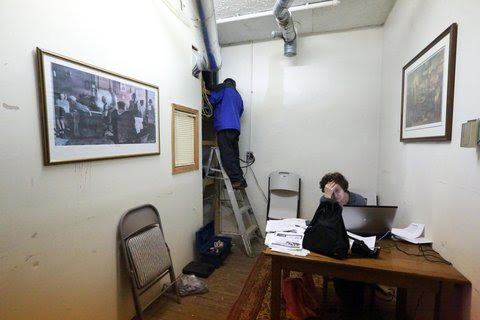 Suzanne DeChillo/The New York Times
The Wave, the weekly newspaper in the Rockaways, has resumed printing after Hurricane Sandy ruined its offices. On Wednesday, Susan Locke, the publisher, worked on the computer, while Sandy Bernstein, the general manager, tried to keep the phone lines working.
Never has the name of The Wave, the weekly newspaper of the Rockaways, seemed so apt.
“Wave of Fire, Wall of Water,” read the headline atop The Wave on Friday. It was its first print edition since Hurricane Sandy sent over four feet of water crashing through its offices on Rockaway Beach Boulevard five weeks ago, forcing the newspaper to stop publishing for the first time in its 119-year history.


Like everybody else fighting to recover from the storm, many of the employees had lost almost everything. Like everyone else, they needed cars, electricity and a dry place to sleep.
Like other local companies, The Wave has had to cut back on labor. It may be in the news business, but it is also a small business, and the staff members knew it would live or die by how quickly they could start putting out a newspaper again.

“Right now, we’re trying to stay alive and do what we do,” said Howard Schwach, the editor, who has worked at The Wave since 1982. “I knew I couldn’t do every story, but I wanted to keep The Wave alive.”

So, relying on luck and good humor, that is what the newspaper did.
The only full-time reporter, Nicholas Briano, happens to live in an untouched part of Brooklyn. He could drive, and when he ran out of gas, he made calls and updated the newspaper’s Web site and Twitter account, which has doubled its number of followers since the storm.

Mr. Schwach, whose extended family lost three apartments and five cars in the hurricane’s aftermath, fled the cold and dark to his daughter’s house on Long Island. “It was very frustrating to be at arm’s reach when so much was going on,” he said.
As limited as The Wave’s reporting had to be, its readership in the days after the storm was even more so, as residents of the Rockaways could neither charge their electronic devices nor get Internet or cellphone service.

There were fortunate breaks.
The general manager’s son, who works on the business staff, was in New Rochelle, N.Y., the night of the storm, which saved his car from the flooding. His great-aunt, the publisher, Susan Locke, has an intact house, so she offered the general manager, Sanford Bernstein — whose house and cars were ruined — a home.
And the empty second-floor room above The Wave’s offices was big enough for a makeshift newsroom, where the staff worked until midnight last Thursday. (The staff calls it the “Wave Cave.”) 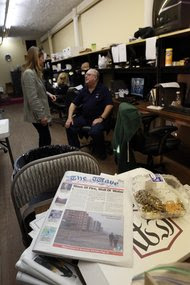 Suzanne DeChillo/The New York Times
The Wave is operating out of a cramped space that once housed a church.
The devastation downstairs was almost total. The bound archives, spanning 118 years of Rockaways history, were destroyed. So were furniture, kitchen appliances, a copy machine and a mail labeler, along with the computers that Mr. Bernstein thought would be fine if they were on the desks. That was not high enough.
Among the few things spared were two wall-mounted clown heads — memorabilia from the old Playland amusement park — that now stare over a room stripped down to wall studs and concrete.
Before Tropical Storm Irene hit, in 2011, the newspaper’s staff members had taken everything to the second floor, but this time, they decided the storm threat did not merit the trouble.
As the downstairs facilities were being cleaned out in the first weeks after Hurricane Sandy, the upstairs space, which once housed a tiny church, began to fill up. A medical center donated computers. New tabletops from IKEA, mildly damaged shelves from downstairs and wooden bases became temporary workstations.
Mr. Bernstein reinstalled software. “A bunch of things went wrong last week,” he said, “and I’m sure a whole bunch of things will go wrong this week.”
He does not have a solution to the biggest question of all: the future. The Wave is likely to become a barometer of the Rockaways’ economic recovery, as its finances rise and fall alongside the small businesses that advertise in it. And Mr. Bernstein is not sure he will be able to reinstate all of the newspaper’s freelance artists and part-time reporters.
Before the newspaper’s distribution resumed, Mr. Schwach went through the new issue and crossed out the advertisements scheduled well in advance for each business wiped out by the storm. Then, bundles of free copies went out to churches, open stores and warming stations. People grabbed them by the handful, delighted to see a neighborhood institution back in business.
The front-page article told readers that The Wave had been born of a disaster (a fire in 1892 that inspired a local printer to start his own paper). And the article ended with the hope that the edition would serve as a commemoration of the storm.
Ms. Locke, the publisher, has not yet made plans to rebuild the newsroom, but she is adamant about one thing. “This time,” she said, “we’ll put everything up high.”