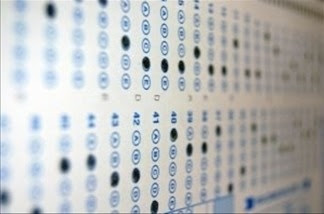 Rogers Herr Middle School
Standarized test scantron answer sheet
Students have posted several hundred images of this year's state tests online on social networking sites including Facebook, Tumblr, Twitter, Instagram and Pinterest, California Department of Education officials said today.
The California Department of Education learned about the testing security breach within the last 24 hours after a district notified them that a student was seen taking a photo of an exam with their cell phone, said department spokesman Paul Hefner.
Schools across the state are currently in their annual testing season (which spans several months) for the STAR, or Standardized Testing and Reporting Program, and California High School Exit Examination.
The department has asked the website operators to remove the pictures of these tests, and notified all school districts statewide as well as testing coordinators today to "be extra vigilant" in following security protocols, Hefner said.
"Our security protocols require that students not have access to any electronic devices while taking the test or handling testing materials," Hefner said. "The good thing is that for the prevention of this all schools really need to do is follow the established security protocols we have."
Officials are also working with ETS, its statewide testing contractor, to help assess the vulnerability of the tests and particular questions. Specific questions may not be scored if they are determined to have been especially compromised, Hefner said.
Most of the images, which go back as far as four days, showed students posing with closed test books celebrating a finished test, or posing and playing around with answer sheets, such as filling in dots to spell out words, Hefner said. In one case a student wrote out "YOLO" in dots, or "you only live once," and posed with the sheet, Hefner said. In a limited number of cases there are pictures of test booklets open to a particular question, where it may be possible to read the question and answers, Hefner said.
"Again, students should not have access to any kind of electronic device while they're working with test materials," Hefner said. "Any kinds of pictures are a problem to a degree. Obviously it's lesser than seeing an answer to a particular test question."
Students with special needs are the only ones allowed to have cell phones with them in testing situations and may use them only under close supervision, state officials said.
The department is still trying to determine the total number of unique test pictures and accounts that have posted them. Hefner said in many cases one photo is cross posted on Instagram, Tumblr and Facebook, for example. "We're still just getting our arms around this problem," he said.
In some cases the student's name or school is identifiable, and those districts are being notified, Hefner said. He said at least a "couple dozen districts" have been able to identify images that relate to them.
"Schools have a responsibility, in fact they all sign legal affidavits, that they will properly administer the test," Hefner said. "And so if there’s any question about the administration of the test they have to conduct a probe...and report back to us."
Public Instruction Superintendent Tom Torlakson said in a statement that following proper security protocol for testing was "vital to maintain the integrity of the testing process."
Tami Abdollah can be reached via email and on Twitter (@latams).
Posted by ed notes online at Monday, May 14, 2012