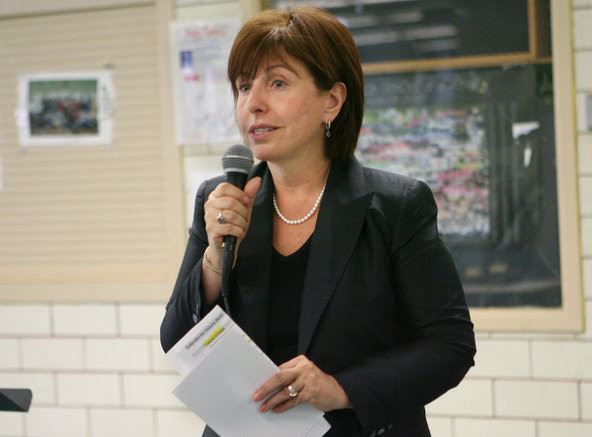 Sara Krulwich/The New York TimesValerie Reidy, principal of Bronx High School of Science, in 2008.
By Anna M. Phillips
Simmering tensions between the faculty and administration at the prestigious Bronx High School of Science have led to a new exodus of teachers, with eight of the school’s 20 social studies teachers choosing not to return this year.
Of those who left, one teacher retired several years before she planned to, one took a sabbatical, and six left for positions in other schools, faculty members said. While one teacher landed a job at the elite Stuyvesant High School, several of the others went to places where it will take extra effort to ensure that students pass the Regents exam and graduate with a Regents diploma.
“In my 25 years of teaching experience, I have never witnessed so many people transfer out of one department so quickly,” said Louis DiIulio, a social studies teacher who remains at the school.
In interviews with seven current and former Bronx Science teachers, blame was placed on the school administration, particularly its principal, Valerie Reidy. Ms. Reidy has been at the school for 34 years, and principal since 2001.
In 2005, the infighting was so intense that it became public with student protests and actions by the city’s teachers union. Over the years dozens of teachers have left, with much of the math department turning over in the last two years.
Teachers said the social studies department, which was known as tight-knit and collegial, had become a place where administrators berated teachers in front of other colleagues. They said their teaching styles were nit-picked, and they became increasingly uncomfortable with the administration’s treatment of three younger social studies teachers, all of whom were not given tenure at the end of the school year and did not return.
“It’s a great risk to leave a school like Bronx Science,” said a social studies teacher who left this year and spoke on the condition of anonymity, for fear that it could jeopardize his new job. “There aren’t that many Bronx Sciences, so you’re giving up on the great students and teachers. But the reason you’re giving up is you have to get out.”
Ms. Reidy discounted the complaints, saying the departures were natural, given that many teachers in the math and social studies departments were older. She also said teachers were more willing now to move from school to school.
“Turnover happens and our job is to make sure that when turnover happens, it’s a positive thing for students,” she said. “So while there has been turnover, I feel very good about the people we’ve hired, and I’m confident in their abilities.”
Ms. Reidy said she believed that three of the social studies teachers had left because they were unhappy not to have gotten tenure, and that she did not know why two of the department’s tenured teachers left.
But one of the untenured teachers said, “When I left I knew that my best chance of getting tenure in the 2011-12 school year was to stay in Bronx Science, but because of the way we were treated, it was too much of an unhealthy work environment.”
Last week, one of the untenured teachers filed a complaint with the Equal Employment Opportunity Commission, alleging racial discrimination by Ms. Reidy and David Colchamiro, an assistant principal of social studies.
The complaint claims that Mr. Colchamiro encouraged the teacher, who is black, to become a secretary or school aide instead of being a teacher.
“This is real good fiction,” Ms. Reidy said of the teacher’s allegations. “It may play well, but it’s not accurate.”
Out of a teaching staff of about 140, 26 people — about 19 percent — did not return to Bronx Science this year. School officials said 11 of them retired.
Citywide, the turnover rate last year was about 14 percent.
At Bronx Science, 23 percent of the teachers in 2010 had fewer than three years of experience in the city’s schools. The parallel percentages at Stuyvesant High School and Brooklyn Technical High School, Bronx Science’s two main competitors for the city’s top students, were 6 percent and 1 percent.
The complaints by the Bronx Science social studies teachers are reminiscent of those made in a special complaint in 2008. At that time, 20 of the school’s 22 math teachers accused Rosemarie Jahoda, the math assistant principal, of harassing and intimidating new teachers. In 2010, an arbitrator ruled that both Ms. Jahoda and the school’s chapter leader, Peter Lamphere, should be transferred to other schools. City education officials did not follow the recommendation.
The years of turmoil and infighting have not failed to attract the attention of administrators at other high schools.
“It was a constant question in interviews: ‘Why are you leaving Bronx science?’” said a former social studies teacher who left this year. “A lot of the other administrators already knew why we were leaving, they just wanted to hear the story.”
The changes have not sat well with alumni, many of whom are talking among themselves about what they interpret as turmoil at the school.
Sarah Hofer, who graduated in 2005, said she once planned to return to Bronx Science as a math teacher, but abandoned that idea when she saw former teachers she admired head for the door.
Ms. Hofer said she now returns her alumni association contribution card every year blank, except for the words “I’ll pay my dues when Reidy leaves.”
“We’ve exhausted the topic,” Ms. Hofer said of conversations with other Bronx Science alumni about the state of the school.
“How many times when you see friends can you talk about the fact that your high school is falling apart? It’s something we know and acknowledge.”

Anna M. Phillips is a member of the SchoolBook staff. Follow her on Twitter @annamphillips.
Posted by ed notes online at Friday, September 16, 2011