George N. Schmidt - August, 2011
Officers of the Chicago Teachers Union reacted with fury on the Friday before the Labor Day weekend began upon learning that Jean-Claude Brizard, the controversial Chief Executive Officer of Chicago's public schools, had announced by press release that two Chicago elementary schools had supposedly voted for a waiver of the union contract earlier in the day. According to the union officials, the union had received no information either from the schools or from the Board of Education that the supposed votes had taken place. 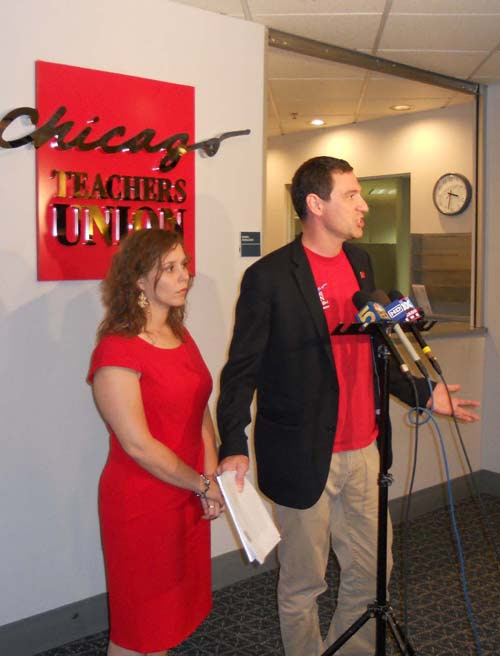 Chicago Teachers Union Vice President Jesse Sharkey (above right) spoke with the media on Friday, September 2, after the union learned that the mayor and the schools CEO had issued a press release announcing two elementary school waivers without informing the union. With Sharkey above is CTU Financial Secretary Kristine Mayle. Substance photo by George N. Schmidt."This is an insult to all of our 30,000 members," CTU Vice President Jesse Sharkey told a small press conference hastily convened at the union's Merchandise Mart offices at 3:30 p.m. on Friday, September 2, 2011.


Sharkey told reporters who were able to make the event that the union had not been informed either by the schools or by CPS that the supposed waiver votes had taken place.

In a statement issued by the union, Sharkey charged "CTU contends that the Board has coerced principals to force this waiver vote on their staff. We have heard of gifts being offered as bribes to teachers and other concessions if they vote for a longer school day."

"The CTU also provided reporters with a copy of a grievance filed against the Board of Education on August 30 on the waiver questions. The grievance, which was submitted to Cheryl Colson, Director of Labor and Employee Relations at CPS on August 30,m states: "The Chicago Teachers Union contends that individual school principals have demanded that the school Union Delegate , and all bargaining unit members, take a WAIVER vote to increase the school day an additional 90 minutes per day. The Chicago Teachers Union views this demand by the school principals as a form of coercion and a violation of the Agreement and Board Policy!'"


At approximately noon on September 2, 2011, the Chicago Public Schools Office of Communications issued the following press release, which was received by Substance at the Substance email address. The press release includes a quotation which supposedly has been made both by Mayor Emanuel and CEO Brizard.


FOR IMMEDIATE RELEASE:
September 2, 2011
Statement from Mayor Emanuel and CPS CEO Brizard on Teachers that Voted in Favor of Longer School Day Today at Their Schools


Teachers At Some Schools Break Ranks, Agree To Longer Day

Reporting Jay Levine
CHICAGO (CBS) — Mayor Emanuel has won a major victory in his  push for a longer school day.
Teachers in Chicago city schools on Friday broke ranks with their union leaders, agreeing to voluntarily add 90 minutes to each day’s classes.
CBS 2 Chief Correspondent Jay Levine reports how it happened.
It was a surprising development, though it was tipped by Chicago Public Schools CEO J.C. Brizard earlier this week. After the Chicago Teachers Union flatly rejected his offer of 2 percent raises for elementary school teachers in return for an extra 90 minutes a day, he tried something else with individual schools’ faculty who had the right to vote to extend the school day at individual schools.
Voting yes were 66 percent of teachers at Skinner North Elementary on the north edge of the old Cabrini Green complex; 76 percent of teachers at STEM Magnet School on the Near West Side; and 75 percent at Genevieve Melody Elementary in Austin.
The determining factor appeared to be $150,000 extra per school. Skinner principal Ethan Netterstrom said he told teachers they could allocate that money however they wanted.
Teachers already been pressured by the CTU, whose website urged them to vote no to a waiver agreeing to change the school day. Mindful of the pressure from the union, the teachers inside Skinner Elementary, preparing for next week’s opening day, were reluctant to talk about their decision on Friday.
But parents coming to register their children were clearly pleased.
“I think the teachers here are incredibly smart, they know what’s good for the school and the students,” Skinner parent Suja Geevarghese said.
Mayor Emanuel and Brizard issued a joint statement, calling the teachers’ votes “courageous.”
But the CTU contends the board coerced principals to force this waiver vote on their staff, with gifts being offered as bribes to teachers in return for a longer school day.
The union calls it “plantation politics” and has filed a grievance. CPS says the 2 percent bonuses are exactly what was offered last week and that other teachers have also expressed interest in getting on board.
Posted by ed notes online at Friday, September 02, 2011