The relentless self-promotion of Zeke Vanderhoek 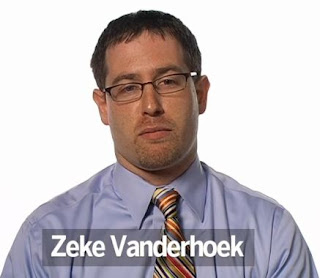 Zeke Vanderhoek gets more publicity for failure than most people do for success.
He got four articles in the New York Times before he even opened his charter school, The Equity Project; bragging how he would get better results with larger classes by paying teachers more, at $125,000 per year, plus bonuses if their students did well enough.
Though the test scores at his school turned out to be terrible, he still manages to score a profile in 60 Minutes this weekend.
He is clearly a genius at self-promotion, if nothing else.
First, there was a front page story in the NY times, on March 7, 2008, when he announced the idea of his charter school:

“I would much rather put a phenomenal, great teacher in a field with 30 kids and nothing else than take the mediocre teacher and give them half the number of students and give them all the technology in the world,” said Mr. Vanderhoek, 31, a Yale graduate and former middle school teacher who built a test preparation company that pays its tutors far more than the competition….“This is an approach that has not been tried in this way in American education, and it opens up a slew of fascinating opportunities,” said Frederick M. Hess, director of education policy studies at the American Enterprise Institute. “That $125,000 figure could have a catalytic effect.”… Mr. Duffy [head of DOE’s charter office] said the school could have a “tremendous impact” throughout the country.

If that wasn’t enough free publicity, there was a New York Times profile one week later, in which he was quoted as follows:

“The money is a signifier. Because money, in our culture, is a signifier of how jobs are valued, and right now schools are telling teachers that they are not valued.”

The NY Times opinion blog posted a piece by a teacher and TEP board member, promoting the school in October 2008. In December, the Times magazine section featured him in an article by Paul Tough (chronicler of Geoffrey Canada and Harlem Children’s Zone) focused on the “new ideas” of the year:

Zeke M. Vanderhoek, the founding principal of the Equity Project Charter School, opening next fall in the Washington Heights neighborhood of Manhattan, says he wants to attract “highly qualified individuals” to teach at his school. To be hired, according to the school’s Web site, you need to be able to prove you have “expert subject-area knowledge,” present a “portfolio of achievement of past students” and score above 90 percent on the verbal section of a graduate-school entrance test. In exchange, every teacher gets a starting salary of $125,000, plus an initial annual bonus of up to $25,000: high pay for high expectations.

The Times ran yet another front page story on the school, before it was even launched, in June 2009:

The school, called the Equity Project, is premised on the theory that excellent teachers — and not revolutionary technology, talented principals or small class size — are the critical ingredient for success….Over the past 15 months he conducted a nationwide search that was almost the American Idol of education — minus the popular vote, but complete with hometown visits (Mr. Vanderhoek crisscrossed the country to observe the top 35 applicants in their natural habitats) . [His teachers] are members of an eight-teacher dream team….I have tremendous confidence that the staff is going to be excellent,” he said.

Vanderhoek was also interviewed on WNYC on the Brian Lehrer show in March 2008 and again on the national NPR show, the Takeaway in June 2009.
He was yet again featured this fall in a highly deceptive article by Justin Snider of the Hechinger report, reprinted in papers around the country, about how the very existence of this charter school proved that teacher quality is more important than class size:

The reality, though, is that of all the things we should worry about in providing a quality education to our children, class size isn't high on the list. Teacher quality matters a lot more. Zeke Vanderhoek, the founder of The Equity Project Charter School in New York City, knows this. His teachers are the most highly compensated public-school educators in the country, earning minimum salaries of $125,000 per year. How does the school afford such salaries? Because Vanderhoek decided he'd much rather have the nation's top educators teaching classes of 30 students rather than mediocre folks teaching classes of 20 students.

Yet Snider conveniently forgot to mention that despite all that huge pay and stellar recruitment, the test scores of the school’s students had bombed, with some of the worst in the city. As Mona Davids of the NY Charter Parents Association pointed out on our list serv:
“He should fire himself now. Equity Project only had a 31% pass rate. Where's his accountability?”

Even the NY Charter Center , the well-funded charter school booster, admitted such in its latest report:

“By the same token, charter schools that are attempting to pioneer innovative approaches but have posted low scores will be important for authorizers and observers to monitor over time. Examples include The Equity Project …”

Yet now, Vanderhoek gets another free national publicity boost, featured on 60 Minutes on Sunday! Why, you might ask?
Because he apparently says he will fire many of the “star” teachers he just hired. And because this message of firing teachers is aligned with the corporate reformers, they will promote his hare-brained ideas.
Imagine, how much free publicity he’s getting, despite (or because of ) his failures.
Can you see the headlines if he had succeeded in getting good test scores? More front-page articles about how his school had proven that class size doesn’t matter, and that all is important is teacher quality and merit pay? Lots of money to promote all his wrongheaded ideas, from Michelle Rhee, Bill Gates and others?
I also wonder why it’s considered heroic that he apparently says on the show that he will quit if his school doesn’t succeed in four years. Onwards and upwards! Perhaps he’ll be awarded a cushy job in a Gates-funded think tank or a Broad-sponsored superintendency. Because in the world of corporate education reform, failure clearly is not an impediment to success.
Leonie Haimson
Executive Director
Class Size Matters
Posted by ed notes online at Friday, March 11, 2011

I find it interesting that Leonie Haimson refers to Zeke Vanderhoek as a relentless self-promoter. However, if you look at the TEP website (tepcharter.org) there is no self-promoting anywhere on the site.

In contrast, take a look at Leonie Haimson’s website: http://www.classsizematters.org/
On her own site, she engages in a lot of self-promotion:
1. She highlights the fact that she was profiled by the New York Times.
2. She shamelessly states the following: “Haimson has published numerous opeds, articles, and letters in media outlets, and in 2006 the New York Times called her ‘the city's leading proponent of smaller classes’ “
3. She shamelessly states that she was “chosen as a NYC Family Hero.” Oddly, she provides a link to back up this claim, but the link does not work!
4. She shamelessly highlights that a report that she authored was “cited on the floor of the US Senate.”
5. The list goes on and on….too many to innumerate.

So I ask you, who is the real, relentless self-promoter?

Those scores couldn't have been any better than they were - think of where the kids are coming from and try to escalate from there.....you only can hope for baby steps of success as these kids respond to learning. One strategy they might employ is Concept Mapping...shown to increase retention by 85%. Meaningful learning! not rote mode.
Laine Gurley, PhD

As a proponent of education, were you pleased or disappointed to learn that TEP just scored in the 90th %tile this year? You can download their report here:
http://schools.nyc.gov/OA/SchoolReports/2011-12/Progress_Report_2012_EMS_M430.pdf