What Does Unity Like Groups Do if They Lose an Election?

While retired UPC union officials draw pensions of $100,000 and up... UPC attempts disruption of December 1 House of Delegates meeting with falsified financial figures

Zulma Ortiz and Carrie Maxwell - December 04, 2010
At December 1, 2010 Chicago Teachers Union House of Delegates meeting, members of the United Progressive Caucus (UPC), who just lost last spring’s CTU election, handed a flyer out to attendees as they entered the building for the meeting. According to the UPC, current officers and staff at CTU are earning more than $100,000 per year. In fact, it is many UPCers (including one who participated in the leafleting) whose pensions are over $100,000 per year. And these pensions, combined with an soon to be released analysis of union finances, show what was really happening to the finances at CTU between 2004 (when UPC came back into power) and July 1, 2010 (when CORE's winners took office at CTU). During the last six years UPC was in power, union staff salaries were the highest ever. [See final paragraphs of this article for some of the UPC pension details]. 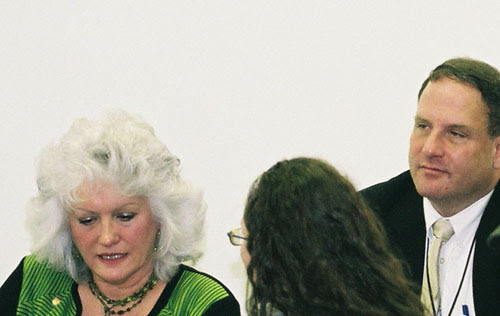 Chicago Teachers union field reps (and UPC people) Molly Carroll (left) and Jerald Siegel (right) waited above for the speakers to be called at the April 2006 meeting of the Chicago Board of Education. During the time Marilyn Stewart was head of the CTU and the UPC, staff salaries and benefits were enhanced significantly over those received under Stewart's predecessor, Deborah Lynch. When Stewart lost the election in June 2010 and Karen Lewis took office, salaries of top staff were adjusted (downward) to reflect the union's true financial position. Both Carroll and Siegel took retirement in the summer of 2010. Carroll is now drawing a pension of $9,758.42 per month ($117,101.04 per year). Siegel's pension is $8,088 per month ($97,058 per year). Substance archive photo by George N. Schmidt. The December 1, 2010 UPC flyer outlined the so-called salaries of the current CTU leadership, accusing them of getting paid extremely high salaries (all more than $100,000 per year). This accusation was false in every instance cited in the flyer, according to those who were named in the document.


And the people who were distributing it continued distributing it even after some of those mentioned in the flyer pointed out that it was false. But the UPC did not provide any sources to back up their claims, the only conclusion one can come to is they are still stewing over their loss in the recent election and making up facts as they go along.

So what is UPC trying to accomplish with this tactic? UPC members don't usually talk to Substance reporters, so we have some questions.

Do they want to break the union?

Are they trying to create discord among union members?


Or are they trying to get back into power at CTU so that they can pay themselves and their cronies salaries (with benefits) that total much much more than $100,000 per year (and in the case of one of them, more than $200,000 per year)? At a time when all teachers are being attacked the last thing the number one teachers union in the nation needs is people making false claims about our leadership. By handing out their flyer before the HOD meeting, UPC essentially shifted delegates' focus from the important issues at hand to unsubstantiated claims about the leadership.

The HOD meetings are designed to discuss and brain storm the important issues confronting the union, teachers and other union members, and public education so we can go to the bargaining table prepared to win. A number of delegates noted to Substance that we do not need unnecessary distractions that take away from that fight. It’s time for all parties to set aside their agendas and get to work to protect all teachers before the last threads of our profession unravel before our very eyes.


Following the meeting, one of those named in the leaflet, Nate Goldbaum, went to the UPC members who were at Connie's Pizza and told them that factually his pay is the same as he would have been earning as a teacher had he remained at Whittier Elementary School, where he was teaching before being offered a staff job at CTU. Other officers and staff recounted the same facts to Substance. But UPC hasn't tried to correct the record.


If was impossible for any member of the union to contact UPC at any rate. The leaflet, which was signed "UPC" was anonymous, without any contact information. The UPC website was not even listed.


Six recent CTU officials have taken their pensions since July 2010, when UPC officially left office. Substance received a current list of all teacher pensions from the Chicago Teachers Pension Fund (CTPF) under a Freedom of Information Act request. Here are the numbers:


The former officers are not the only ones now getting pensions in six figures (or very close to six figures). The salaries of the union's staff during the final years of the UPC's most recent power have also done very well, because their pay during those years was so high.


Jerald Siegel, former CTU Field Rep, is now drawing a pension of $8,088.19 per month ($97,058.25 per year!). Siegel was one of the UPC members distributing the December 1, 2010 leaflet. The pensions of other retired UPC leaders, including some who have been retired since 2001 (when the UPC lost to Deborah Lynch and PACT) are also well above the pensions being received by teachers (including UPC loyalists) who retired during those same years.


The retired teachers who still do much of the work for the UPC are earning pensions that amount to less than one-third of the pensions being paid to the retired officers and field reps. 
Posted by ed notes online at Monday, December 06, 2010