As a teacher, Sydney Morris wants to be rewarded if she can show she helps students make progress in her classroom. She also wants to make job protections such as tenure more difficult to get, and in the event that layoffs have to happen she wants the worst teachers to be let go first, no matter how long they've been teaching.
Those are radically different positions than those espoused by the union that represents her, the United Federation of Teachers.
Ms. Morris is not alone. In March, the Bronx teacher and a colleague, Evan Stone, started a group called Educators 4 Excellence, which has since signed up 700 teachers. While that's a pittance compared with the nearly 80,000 teachers under the UFT, her nascent movement may represent the seeds of a growing population of teachers who are breaking ranks with the traditional tenets of unionism.
View Full Image 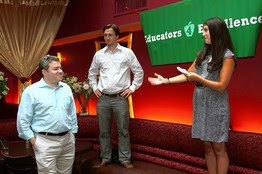 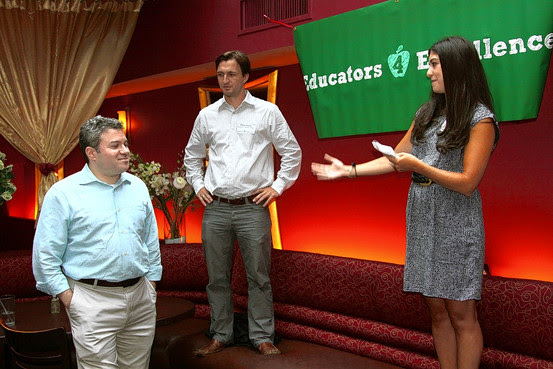 This school year, Ms. Morris and Mr. Stone took a break from teaching and are instead working on building up their organization, including identifying "school captains" at the city's schools—much like the UFT has a "chapter leader" at every public school. They also continue to work part-time at their Bronx school developing curriculum and mentoring novice teachers.
Ms. Morris stresses that her group is "not anti-union, nor are we an alternative" to the UFT. Instead, the group is made up of "educators committed to amplifying authentic teacher voices that are not yet being heard in order to improve the education system to benefit our students."
Of particular concern is the practice of laying off teachers based on how many years they've worked in the schools. That "provides a safety net to be complacent," said Margie Crousillat, a member of Ms. Morris's group who is a kindergarten teacher in the Bronx in her seventh year of teaching. "Some veteran teachers have been teaching 25 years and they are incredible. But some aren't. I don't think age or experience should dictate whether you're safe in your job."
About the UFT, Ms. Crousillat added: "Their priorities are not my priorities."
Ms. Crousillat's comments echo what appears to be an evolution in many teachers' thinking about their profession. In a survey this year by the New Teacher Project, a nonprofit teacher-recruiting organization, three-quarters of teachers said layoffs should be based on more than just seniority. Even a majority of the most experienced teachers supported moving away from considering only seniority when layoffs were required, according to the survey.
The issue became a particular flashpoint this year when the city planned to lay off more than 4,400 teachers. By state law, those layoffs would have been conducted on a last-hired, first-fired basis, meaning most teachers hired after 2007 in New York City would lose their jobs, no matter how they performed in the classroom. Mayor Michael Bloomberg warned that the city's most promising and effective young teachers would be among those let go.
In the end, Mr. Bloomberg froze salaries and canceled the layoffs. But most observers predict that the mayor only stalled the layoffs for one year, and that these teachers will be back on the chopping block next year.
On the Upper East Side, the threat is particularly acute. Nearly 20% of the teachers there are relatively new and would face the layoff axe next year. That's why Assemblyman Jonathan Bing introduced a bill earlier this year to bar seniority as the sole decider in layoffs. On Tuesday, he'll find out how many votes that bill costs him.
Mr. Bing has an inkling already. After proposing his bill, "I went from the union coming to my 40th birthday fund raiser to me being referred to as dead to the union," Mr. Bing said.
Michael Mulgrew, the president of the teacher's union, said he doesn't recall ever saying that Mr. Bing was "dead" to the union. But he said he was disappointed that Mr. Bing would propose such legislation without giving the teachers union an opportunity to discuss it. Mr. Mulgrew has maintained that seniority is the only fair way to lay off teachers and avoid personal vendettas by principals or others.
"I do expect elected officials to understand the issues and legislation they're writing," Mr. Mulgrew said. Mr. Bing's challenger in Tuesday's primary election is a UFT member supported by Mr. Mulgrew, Greg Lundahl.
Most observers believe that Mr. Bing will win the primary, given his eight-year incumbency and overpowering financial resources. Mr. Bing has raised about $400,000 to his opponent's $34,000. Mr. Bing, campaigning on Sunday at an Upper East Side restaurant among members of Ms. Morris's teacher group, said he intends to reintroduce the bill in the next session. He said he's open to dialogue with the UFT on improving the legislation.
Write to Barbara Martinez at Barbara.Martinez@wsj.com
MORE IN NEW YORK
Posted by ed notes online at Monday, September 13, 2010