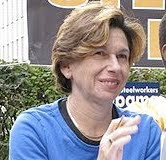 This letter was sent to the American Federation of Teachers national union president.

March 29, 2010
Dear President Weingarten:
“Thanks to Thursday’s (March 25) vote of the Washington Teachers Union, President George Parker and certain WTU Executive Board members will not support the April 10 march to the US Department of Education that has been organized by Steve Conn, a Detroit public schools teacher. The purpose of the march is to defend public education by taking a stand against the attacks on teachers; black, Latino, poor, working class and middle class students of all races; end privatization of public education; end separate and unequal schools; and restore Dr. King’s vision for America.
Thanks to Thursday’s vote, Washington Teachers Union President George Parker and certain WTU Executive Board members were unwilling to allow information about the April 10 march to be placed on the WTU Executive Board agenda so that I could explain why public school teachers and their students will travel here to DC on buses to stand up for public education. I was disappointed to learn that AFT, our parent organization, also will not support the April 10 march on the US Department of Education (as reported by WTU President George Parker)
This got me to thinking that, unlike teachers, neither you President Weingarten nor George Parker will be wiped out in July by an IMPACT evaluation that is grossly unfair to teachers, neither you President Weingarten nor George Parker have been wrongfully terminated at the whim of a chancellor and neither you President Weingarten nor George Parker will be forced to consider a contract proposal (tentative agreement) after three long years that gives more leverage to administrators to terminate effective teachers or be faced with reassignment options under mutual consent provisions.
I am troubled that our current WTU president, George Parker, is unwilling to have an open discussion with our WTU Executive Board members informing them about the march simply because the AFT has not endorsed the event. I know that Steve Cohn advanced this issue directly to George Parker and Monique Lenoir, WTU Communications Director, for consideration.
For this reason, I appeal to you to let members of the Washington Teachers Union, Local 6, decide whether they want to attend this event. At a time when public education is in peril, we all need to stand together as one in solidarity and struggle. If teachers can travel from across these United States, at the very least DC teachers should be afforded the option of standing alongside our colleagues. So far the Detroit Federation of Teachers, The California Federation of Teachers, The New Haven (Connecticut) Federation of Teachers, and the Detroit School Board have signed on to lend support.
I ask you President Weingarten to do the following: post an announcement on the AFT web site providing details about the April 10 Washington, DC, march to the US Department of Education and send a letter to WTU/AFT members informing them about the upcoming event. As the American Federation of Teachers national union president, you have an obligation to represent all union members, not only those who share your point of view.
Signed, Candi Peterson
full dues paying member of WTU and AFT
Washington Teachers Union Board of Trustee
Washington Teachers Union Building Representative
Posted by The Washington Teacher
Posted by ed notes online at Tuesday, March 30, 2010