Obama Wins a Battle as a Teachers' Union Shows Flexibility

A showdown between the White House and the powerful teachers' unions looks, for the moment, a little less likely.

This week in New Haven, Conn., the local teachers union agreed, in a 21-1 vote, to changes widely resisted by unions elsewhere, including tough performance evaluations and fewer job protections for bad teachers.

Education Secretary Arne Duncan, as well as the unions, said the New Haven contract could be repeated in other school districts. 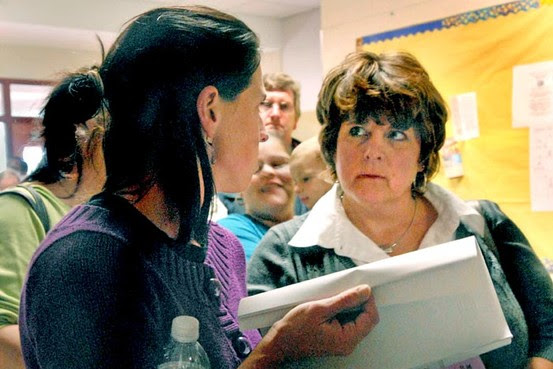 "I rarely say that something is a model or a template for something else, but this is both," said Randi Weingarten, president of the American Federation of Teachers, who helped broker the New Haven deal.

"This shows a willingness to go into areas that used to be seen as untouchable," Mr. Duncan said.

His cause for optimism is this: If teachers' unions start showing flexibility in other cities, the administration's high-stakes push to boost graduation rates and improve test scores at public schools could get a lot easier. That might even spare the administration an unwanted fight with a labor force that gave Mr. Obama a big lift in his election.

"I'm not going to be silent where schools are perpetuating poverty and social failure."
-- Read more from Mr. Duncan's interview with the Journal

Under pressure from the Education Department, the country's two powerful teachers unions, Ms. Weingarten's AFT and the larger National Education Association, are already budging in ways that were previously unthinkable. The two unions have a combined membership of 3.6 million employees.

The AFT recently issued a batch of innovation grants to districts that are tying teacher pay to performance -- a practice usually frowned upon by unions. The NEA is taking similar steps to encourage tougher evaluations and to loosen seniority systems, moves that Mr. Duncan called "monumental breakthroughs."

It is also noteworthy that the AFT seems almost as pleased with New Haven as Mr. Duncan.

Public schools in many bigger cities, including New York, Los Angeles and Washington, D.C., are seeing the usual tension between unions and school administrators.

In Washington, Chancellor Michelle Rhee has collided with both the national and local unions. The city moved ahead recently with the firing of 388 school employees, nearly 6% of the work force.

In New Haven, by contrast, all sides agreed on the new contract after months of closed-door negotiations. The deal allows the city to close its worst schools and bring in new management, though any new teachers would have to join the union. In exchange, the union got an average 3% raise each year for four years.

A big question now is whether Mr. Duncan can proceed with federal efforts to remake U.S. public schools without stirring up storms like the one in Washington.

His one big advantage is financial. The administration plans early next year to distribute $4.3 billion under its "Race to the Top" program to help states set new testing standards, boost teacher quality and help rescue -- or close -- thousands of the worst-performing schools in the U.S. Beyond that, the department has another $5 billion for various school-improvement and innovation grants.

The administration is using its pot of money to get states to revamp rules that bar performance pay and charter schools, which rely on public money but are run outside the public system. Nearly 10 states have taken such steps to qualify for the funds. Select states will have to use the money to reward and encourage the changes.

So far, the administration has avoided a fight with unions. Mr. Duncan meets every few weeks with Ms. Weingarten and the NEA's president, Dennis Von Roekel.

But there is still plenty of room for friction.

Mr. Duncan, the former superintendent of Chicago public schools, got booed by teachers in July when he praised performance-based merit pay at NEA's annual convention. "You can boo," he told the crowd, "just don't throw shoes, please."

A few weeks later, the Education Department released tentative guidelines for changes states have to undertake to qualify for the federal grant money. Unions, school boards, city governments and outside groups responded with more than 1,200 recommended changes.

With the final rules scheduled to be out in mid-November, the unions are warning about limits on their flexibility. The groups are most troubled by Mr. Duncan's quest to link teacher pay to student performance, especially if it is measured only through standardized tests.

"To evaluate a teacher or a school on a single test makes no sense," said Mr. Von Roekel, who used to teach high school math in Arizona.

The unions also are wary of some of Mr. Duncan's other prescriptions, including his proposals to shut down and reorganize many of the country's most troubled schools.

For now, potential antagonists are holding fire. "I may disagree with their tactics," Mr. Von Roekel said, referring to Mr. Duncan and his team. "But I wouldn't question their intent or motivation."