Dan Brown on Rhee Attack on Teachers - at Huffington Post

Your request is being processed...

Mass Teacher Layoffs in D.C. Amount To One Hell of a Power Play by Michelle Rhee

No one knows yet who's going to go, but I wouldn't bet that the shiny new hires will be first out the door. Rhee's celebrity-- burnished by a cover story in Time Magazine-- is defined by her quixotic "battle against bad teachers." In Rhee's world, the quality of public education in D.C. has been dismal for years because of a critical mass of lazy, ineffective veteran teachers haunting classrooms.

In her mind, the solution lays in clearing out the oldies in favor of legions of rookies with prestigious degrees and two-year teaching commitments. Evidenced by her death-match negotiating tactics with the Washington Teachers' Union, Rhee would love nothing more than to eviscerate collective bargaining and make all teachers at-will employees, corporate-style, accountable only by their students' test scores.

Her latest gambit might be her wildest. How can someone hire nearly 25% of their work force over the summer and then less than a month into the school year throw up her hands and move to lay so many off?

Step 1: Hire a lot of Teach For America rookies and people who agree with you.

Step 2: Put in place impossible-to-meet standards for teacher performance to make anyone a target for sacking.

Step 3: Announce there has been a budget shock and a reduction in force is unavoidable because of the economic downturn. Pretend you somehow didn't understand in July 2009 how bad our budget situation would be in just two months. The teachers to be reduced will be selected out of those with less than stellar "performance" (and practically everybody will be vulnerable).

Step 4: Get rid of whoever you want, sidestepping due process and remaking the teaching force in your image.

This brand of shock therapy is attractive to observers who love words like "bold" and "hard-charging" and assign them to self-styled reformers like Rhee who want fast revolutions. They dismiss voices of caution and defense of existing contracts and due process as defense of the abominable status quo.

That's disingenuous. The union ought to be open to loosening tenure provisions, but Rhee simply misses the boat by blaming DC children's academic struggles squarely on teachers. Rhee's mislaid battle of gutting the union and purging veteran teachers will leave an experience and institutional knowledge vacuum that no quantity of super-caffeinated twenty-two-year-old Yalies can remake. As with any profession, there are some teachers in D.C. who should not be there, but Rhee is moving here to throw out the baby with the bathwater.

It's a fallacy that Ivy League grads are sprinkled with the fairy dust of brilliance to waltz into a classroom and be a great teacher. I received a world class education at NYU, and got the tar kicked out of me by a class of Bronx 4th graders in my rookie year. Becoming a good teacher takes time, reflection, and support. Many of the strategies it takes to succeed are non-intuitive and reflective of each teacher's unique personality. Most of the Teach For America teachers I meet have the makings of great teachers -- but they're nowhere near great in their first two years.

Rhee's sweeping dismissal of so many experienced teachers will hurt far more than its sending a small number of truly washed-up teachers out to pasture will help. The ground-level effects of this veteran bloodletting will be immeasurable.

Since the start of her tenure, Rhee has followed New York City Schools Chancellor Joel Klein's lead by repeatedly calling herself a reformer, and trumpeting basic skills standardized test scores as the definitive word on a student's education. To achieve success in this brave new world, autocratic, corporate-style power is crucial. Too many dissenting voices could reveal that the emperor of testing isn't wearing any clothes when it comes to truly supporting students.

Rhee's mass hiring of newbies thankful to have jobs, juxtaposed with an expected mass layoff of veterans who know about how schools should run, takes cold-blooded, short-sighted "reform" to a new level. 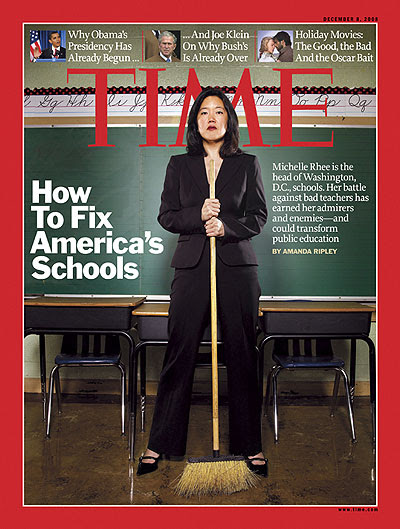 Dan Brown is a teacher at a public charter school in Washington, D.C. and the author of The Great Expectations School: A Rookie Year in the New Blackboard Jungle. He is not a member of any teachers' union.