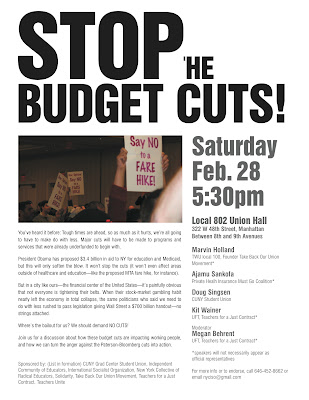 Come to a discussion with a panel of NYC activists discussion how we can...

You've heard it before: Tough times are ahead, so as much as it hurts, we're all going
to have to make do with less. Major cuts will have to be made to programs and
services that were already underfunded to begin with.

President Obama has proposed $3.4 billion in aid to NY for education and Medicaid,
but this will only soften the blow. It won't stop the cuts (it won't even affect areas
outside of healthcare and education—like the proposed MTA fare hike, for instance).

But in a city like ours—the financial center of the United States—it's painfully obvious
that not everyone is tightening their belts. When their stock-market gambling habit
nearly left the economy in total collapse, the same politicians who said we need to
do with less rushed to pass legislation giving Wall Street a $700 billion handout—no
strings attached.

Where's the bailout for us? We should demand NO CUTS!

Join us for a discussion about how these budget cuts are impacting working people,
and how we can turn the anger against the Paterson-Bloomberg cuts into action.

*Speakers will not necessarily appear as official representatives

Heh, this made me chuckle...

"*Speakers will not necessarily appear as official union representatives"

Why not just leave out "necessarily" entirely? Seems like false advertising.

Heh, this made me chuckle...

"*Speakers will not necessarily appear as official union representatives"

Why not just leave out "necessarily" entirely? Seems like false advertising.

Will Ty Johnson be speaking there not necessarily as an official ICE representative?