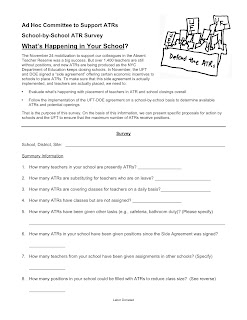 What follows is a summary of the ATR meeting held on Friday, January 9, 2009. Attached is the survey to be downloaded and placed into every school possible. The Fight is ours. 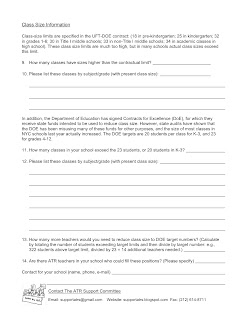 I wanted to report on the January 9 meeting of the ATR support committee. It was well attended with a number of new people. There was a discussion on our successful November 24th rally, impending school closings, and where do we go from here.

Most importantly, we now have an ATR School Wide Survey. Please download it and get it around.

We want to circulate the survey to every school so we can see if the UFT-DOE "Side Agreement" on placing ATRs is working. This agreement only creates some incentives for placing ATRs, but at the principals' sole discretion. Meanwhile school closings are continually creating more ATRs. Nevertheless, we are determined to see that as many teachers as possible are placed under this inadequate agreement.

The UFT chapter at Jamaica HS has written a dynamite letter to the state documenting that there are 14 ATRs who could be placed in the classes they are presently teaching and another 14 positions could be opened by reducing class sizes to what is mandated by the state Contracts for Excellence. We need this kind of information for your school.

So please download the survey and work together with your colleagues to fill it out. Let us know what's going on in your school. We built our movement to support ATRs when hundreds of teachers signed petitions for the November 24 rally and made it an urgent issue. We have to get back to them to follow up. We're also concerned that with eight schools now slated to be closed in the near future, that means more ATRs being sent out into nowhere's land. We need to fight together with parents and students to keep the schools open. 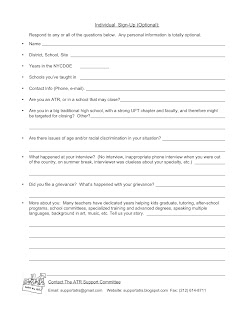 It was decided to have a delegation bring specific problems to the UFT leadership concerning ATRs. We have several reports of schools where ATRs have been teaching classes since the beginning of the school year, yet their principals claim to know nothing about the side agreement. Also, teachers have noted the huge potential for age discrimination in the video resumes that the UFT is working on. And what ever happened to the UFT's age discrimination suit? There are questions about lack of information at the district level.

We need a district-wide listing of available positions that ATRed colleagues can consult. The DOE has this information, but it is not pulled together and available to teachers.

There is a ruling on the situation of the RTR teaching fellows, who were to be fired if they didn't find a permanent position by December 5. The UFT got a court injunction until the arbitrator ruled, which he did last week. While he held that the DOE could not terminate the fellows on December 5, he only gave them until the end of the term, which is February 2. A number of RTRs have gotten positions as a result of their strong protests and organizing and the union grievance/court suit, but there are still several score facing the axe. We need to help them get positions.

So ... please print out, circulate the surveys, and keep building networks of teachers in the schools.