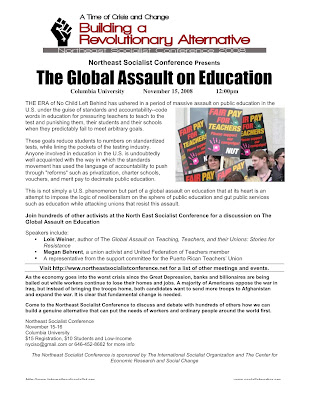 The Global Assault on Education

THE ERA of No Child Left Behind has ushered in a period of massive assault on public education in the U.S. under the guise of standards and accountability--code words in education for pressuring teachers to teach to the test and punishing them, their students and their schools when they predictably fail to meet arbitrary goals.

These goals reduce students to numbers on standardized tests, while lining the pockets of the testing industry. Anyone involved in education in the U.S. is undoubtedly well acquainted with the way in which the standards movement has used the language of accountability to push through "reforms" such as privatization, charter schools, vouchers, and merit pay to decimate public education.

This is not simply a U.S. phenomenon but part of a global assault on education that at its heart is an attempt to impose the logic of neoliberalism on the sphere of public education and gut public services such as education while attacking unions that resist this assault.

* Lois Weiner, author of The Global Assault on Teaching, Teachers, and their Unions: Stories for Resistance
* Megan Behrent, a union activist and United Federation of Teachers member
* A representative from the support committee for the Puerto Rican Teachers¢ Union

Visit http://www.northeastsocialistconference.net for a list of other meetings and events.

As the economy goes into the worst crisis since the Great Depression, banks and billionaires are being bailed out while workers continue to lose their homes and jobs. A majority of Americans oppose the war in Iraq, but instead of bringing the troops home, both candidates want to send more troops to Afghanistan and expand the war. It is clear that fundamental change is needed.

Come to the Northeast Socialist Conference to discuss and debate with hundreds of others how we can build a genuine alternative that can put the needs of workers and ordinary people around the world first.