DAVID vs. GOLIATH: HOW The Puerto Rico Teacher's Union WON A BATTLE..... 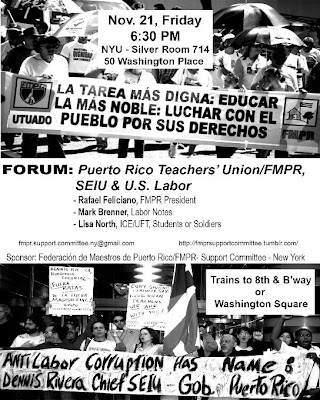 A powerful coalition consisting of the Government, Boss, Courts--and a US Union that spent millions--couldn't defeat the teachers of Puerto Rico, whose union stood firm defending quality public education, labor justice and union democracy in a stunning election victory in October of 2008.
What are the implications for other labor activists and the US Labor Movement as a whole?


some background:
Puerto Rico teachers defeat SEIU raid
Excerpts selected from an article by Brian Cruz, a rank-and-file member of SEIU Local 1021 in the Bay Area.--Oct 31, 2008

PUBLIC SCHOOL teachers in Puerto Rico overwhelmingly voted October 23 to reject representation by the Puerto Rico Teachers Union (SPM)--a union affiliated with the U.S.-based Service Employees International Union (SEIU). Those who voted "no" to the SPM weren't voting against having a union, however. In effect, they were voting in favor of their current union, the Teachers Federation of Puerto Rico (FMPR), which was not allowed on the ballot. The 42-year-old FMPR previously had exclusive rights to represent the teachers. However, the FMPR was decertified by an anti-labor government in January 2008 for voting to go on strike. This created an opening for the SEIU to push its affiliate, the SPM.

The cards seemed stacked against the FMPR. Under Gov. Anibal Acevedo Vilá of the Popular Democratic Party (PPD), the Puerto Rican government had been unwilling to agree to a collective bargaining agreement with the teachers. The FMPR sensed an impasse and decided strike for better wages, better conditions at schools for both teachers and students, and a halt to the privatization of the schools through the expansion of charter schools. However, the island's Law 45 prohibits public workers from striking, so the government decertified the FMPR even before the strike began in early February.

More than just a viciously anti-union government was at play here. In the New York Daily News, columnist Juan Gonzalez revealed that Vilá and Dennis Rivera, a top leader of SEIU, had arranged a deal in which SEIU would contribute to Vilá's campaign for re-election if Vilá would support SEIU's attempts to gain representation. The plan for the raid was for Vilá to refuse to negotiate, and then let SEIU run in a representation election. The vehicle for this plan would be the Teachers Association of Puerto Rico (AMPR), which associated with SEIU in late 2007. AMPR is an organization of administrators of the school system, such as principals and regional directors. As such, it can't represent teachers under Law 45, and in practice, never represents the interests of actual teachers in work disputes. So AMPR created SPM, whose general secretary and main spokesperson, Aida Diáz, is also president of AMPR.

While FMPR won widespread support for its strike, AMPR moved to undermine the struggle. It denounced FMPR for striking, then ran uncontested, via SPM and aided by staff and resources of SEIU, for exclusive representation rights. At first, FMPR challenged the decision that it wouldn't be allowed to participate in the election on the grounds that Law 45 had no provision prohibiting decertified unions from participating. FMPR leaders submitted 12,000 teachers' signatures petitioning for their appearance on the ballot--for which only 8,000 signatures are required. Yet the authorities still denied FMPR a place on the ballot. When they realized the unfair election would continue as planned, FMPR organized a vigorous "vote no" campaign. If successful, it would mean that the SPM wouldn't win exclusive representation rights and the FMPR would still exist as a "bona fide organization" under Puerto Rican law.

By one estimate, SEIU committed between $10 million and $20 million to the campaign, with more than 300 paid organizers on the ground, slick ads and free t-shirts. The FMPR, on the other hand, spent a mere $65,000 ($30,000 of it in loans), with mostly volunteers organizing. The difference is that these "volunteers" were the same people who helped organize the 10-day strike in February that won a wage increase and put a stop to the spread of charter schools. They were rank-and-file members with experience and a history of struggle alongside their co-workers.

FMPR's "vote no" campaign won a clear victory. The official tally is 18,123 to 14,675, in a vote where turnout was nearly 94 %. The victory is all the more impressive given that FMPR was denied the right to have observers at polling places, and that various vote shenanigans took place, with votes appearing after the last day of the election, and various "no" votes being counted as "yes." Now that FMPR has won, it continues to exist as the main organizer of teachers. However, it is not the formal collective bargaining agent. FMPR will maintain its network of shop stewards, continue to represent teachers at the school level, and to fight around issues such as wages and privatization. Eventually, FMPR could perhaps reestablish exclusive representation for the teachers.

The U.S. labor movement has a sordid history of collaborating with the State Department and CIA to undermine labor and democratic movements in other countries. SEIU's alliance with an anti-labor government to raid FMPR is only another chapter. SEIU's defeat in Puerto Rico is humiliating for SEIU President Andrew Stern, who seeks to remold the labor movement in his image. During Stern's 12 years in office, he and his team have centralized power in SEIU at the International level, in the name of being able to negotiate better contracts via "partnership" with employers and organize workers even faster. The result of substituting a militant rank and file with a small team of highly paid staffers is apparent. The types of deals being negotiated from the top have been so bad that rank-and-file workers are increasingly rejecting them.

Obviously, the black eye received by SEIU didn't help the SPM's campaign against the FMPR. Also, the challenge to the top SEIU leadership by UHW and reformers in other locals undermined SEIU's claim to be the way forward for the labor movement. The victory of the FMPR over the alliance of the Puerto Rican government, school administrators and SEIU teaches us important lessons about building unions today. First, it underlines the importance of building a fighting union from the bottom up, as opposed to more bureaucratic methods. Second, it teaches us the importance of genuine labor internationalism, based on rank-and-file action, solidarity and a commitment to union democracy.
Posted by ed notes online at Friday, November 21, 2008