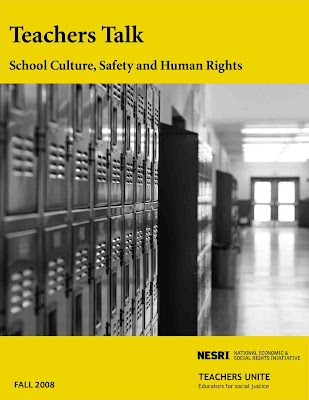 NEW YORK - October 22, 2008. Teachers in New York City public schools say that punitive approaches toward children, such as aggressive policing,
suspensions and other reactive strategies, undermine the human right to
education by failing to address the causes of conflict and criminalizing the
school environment, according to a report by Teachers Unite and the National
Economic and Social Rights Initiative (NESRI).

In the report, "Teachers Talk: School Culture, Safety and Human Rights,"
teachers call for preventive and constructive approaches to discipline that
create positive school cultures, teach behavior skills and use conflict
resolution. Among the largest threats to safety in schools, teachers cited
overcrowding, lack of quality training for teachers, inadequate numbers of
guidance counselors and social workers, and the lack of opportunities for
teachers, students and parents to influence discipline policies.

Sally Lee, Executive Director of Teachers Unite said, "the observations
shared by these teachers are powerful arguments for a new vision of safety
in the schools where they work, and powerful indictments of the city's
approach to education in general. Youth of color in particular, who make up
over 85% of the student population in New York City, are criminalized in
schools and denied their right to education by the lack of resources."

Based on surveys of more than 300 middle and high school teachers in over
136 public schools across the city, as well as focus groups with more than a
dozen teachers, the report finds that:

* Over 18% of teachers said they have intervened on behalf of students
in incidents involving the police or SSAs. 42% of those teachers intervened
because of harassment or disrespectful behavior on the part of police
personnel towards students, or because they felt SSAs or police were
instigating or escalating a conflict.

* In schools with permanent metal detectors, 67% of teachers said that
students are always (23%) or sometimes (44%) late to first period class
because of metal detectors.

"Teachers Talk" proposes a human rights framework as an approach to
reforming discipline and improving school climate. The Convention on the
Rights of the Child, an important human rights treaty that is widely adopted
throughout the world, recognizes discipline as part of an educational
process to develop the social skills of students, encourage learning,
increase school attendance, and protect the dignity and safety of the child.

The report highlights positive models being used in three New York City
public schools - Eastside Community High School in Manhattan, Banana Kelly
High School in the Bronx and the James Baldwin School in Manhattan. At
Eastside Community High School, for example, the 100% RESPECT Campaign
involves students and staff in a process to discuss and define what respect
means in their community. Six months after the campaign was implemented in
the middle school grades, suspensions dropped by 45%.

Eastside Community High School was in the news a year ago when an incident
between a student and a School Safety Agent escalated, resulting in the
arrests of both the student and the principal who tried to prevent police
from taking the student out the front door in handcuffs. In many schools in
New York City that are working to create positive climates, the aggressive
presence of police is undermining their efforts.

"The Department of Education needs to support every school in New York City
in developing their own positive approach to discipline. New York City has
fallen behind other major school districts, like Chicago and Los Angeles,
which have embraced proactive citywide frameworks for discipline, like
restorative justice and Positive Behavior Supports, that guarantee students'
human right to education and dignity in school," says Elizabeth Sullivan,
Human Right to Education Program Director at the National Economic and
Social Rights Initiative (NESRI).

The National Economic and Social Rights Initiative is a non-profit
organization that works with organizers, policy advocates and legal
organizations to promote human rights in the United States. Teachers Unite
is a non-profit organization building a movement of public school teachers
who play a critical role in working for social justice. Both organizations
are funded by private foundations and individual donors.
Posted by ed notes online at Monday, October 27, 2008