Joel Klein has claimed that rapid class size reduction in California caused many problems. As usual, Leonie Haimson is on the case with great information. No wonder Klein is having his people join her listserve so they can get their team of think tank brains, when they're not busy leaving 5 year olds on cold street corners, to work on responses to Leonie's responses. Good luck trying!


In CA, they tried to reduce average class size in K-3 by 10 kids per class in a matter of months, which led to lots of space shortages and quick hiring of uncertified teachers etc.

We are not proposing this happen here in NYC, of course, but instead a phased in approach as is happening in Florida right now – which as a result of a referendum in 2002 that amended the state constitution, has managed to reduce class size in all grades over the last four years w/out any shortage of teachers or space.

Moreover, the results in CA in terms of improved student achievement, teacher retention, and many other factors is a lot more positive than usually argued. Every single controlled study showed significant gains in achievement from smaller classes. I have a fact sheet I wrote a few years back on this that was reviewed and endorsed by Jeremy finn and Chuck Achilles, two of the premier class size researchers. It’s posted here: http://www.classsizematters.org/CA_fact_sheet05.doc

The first round of research was hampered by the fact that class size reduction was done so quickly in most grades and in most schools that the only cohort for which they could find a control group were 3rd graders after less than a year of smaller classes – and the gains were significant but relatively small, as one might imagine. But they were just about the same size as would be expected by the STAR studies in Tennessee – which instead found very considerable gains, because they studied students with four years of smaller classes from K-3.

Yet the CA researchers failed to point out this difference. They also made some egregious methodological errors that even further minimized the gains which I won’t go into here, but have been pointed out recently by the paper mentioned by , which shows really large effects for four years of smaller classes. It’s by , a fellow at . http://www.princeton.edu/~funlu/California_CSR_Fatih_Unlu.pdf

“The results of these analyses suggest that the CSR program has had a positive and significant influence on student achievement in . In particular, results show that between 1996 and 2000, 4th graders’ NAEP test scores in Mathematics increased by between 0.2 and 0.3 of a standard deviation. Although the evidence is less clear as to whether there were differential effects by race, ethnicity and free lunch status; black students seem to have benefited from the CSR program more than any other racial or ethnic group. Finally, these results are robust in many of the analyses performed.”

Also, a lot of people wrongly claimed like Klein that in CA, qualified and experienced teachers fled the high needs districts to teach elsewhere after class sizes were reduced – leading to a less qualified workforce in the areas that needed them the most.

The actual research found otherwise. Teacher attrition fell significantly statewide after class size reduction, and after a short initial rise, the rate of teacher migration (or those leaving to teach in other districts) fell quite dramatically – most sharply in high needs districts.

Though the researchers don’t speculate why, it seems obvious to me that this would most likely be because for the first time, teachers at high-needs schools had a real chance to succeed for the first time. (The reference is here; Lawrence P. Gallagher, “Class Size Reduction and Teacher Migration: 1995–2000,” in: Technical Appendix of the Capstone Report, Part C, 2002, http://www.classize.org/techreport/CSRYear4_appxfin.pdf

I’ll paste a chart from this study, in case you can see it. 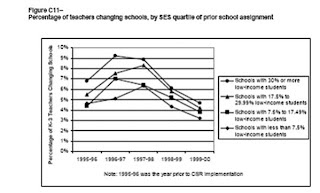 You can see that schools w/ 30% or more low-income students, teacher migration rate fell really sharply following class size reduction in 1996-7, and by 1999, had nearly converged with the low rates found in school districts w/ less than 7.5% low income students.

Moreover, not a single study found any evidence that the teachers hired to reduce class size were less effective than their counterparts; the latest study to confirm this is here: http://www.brookings.edu/views/papers/200604hamilton_1.pdf

Identifying Effective Teachers by Gordon, Kane and Staiger, April 2006: “When the Los Angeles Unified School District needed to triple its hiring of elementary teachers following the state’s class-size reduction initiative in 1997, the district was able to do so without experiencing a reduction in mean teacher effectiveness, even though a disproportionate share of the new recruits were not certified .”

Guess who the Gordon is who is one of the co-authors of this paper?

Robert Gordon, the new man at Tweed, who has also joined this list serv. I highly recommend that people who are interested read this paper, because though I have a lot of problems w/ it, it seems to be a theoretical justification of what DOE intends to now do w/ our schools – give incentives for principals to reduce the no. of experienced teachers w/ low-pay, inexperienced teachers– and identify those who should be given tenure primarily on the basis of the value-added test scores of their students.

The findings that smaller classes lead to lower teacher attrition and are likely to produce a more effective teaching force over time are replicated in studies of the NYC Chancellor’s district of failing schools (where they now plan to cut the funding that led to smaller classes in K-5) and also in the rest of NY state after class sizes were reduced in K-3. See for example, here: “In the long run….reducing class size is a promising way to retain experienced teachers in schools with disadvantaged students.” see http://student.maxwell.syr.edu/elpas/Class_Size_EPas.pdf

This is just as true in the shortage areas that Klein always points to, science and math teachers. A great example is Ric Klass, who has just published a book about his experiences teaching in a large HS in the , called Man Overboard. I highly recommend the book for anyone who’s interested in hearing about the atrocious conditions that new teachers are thrown into in NYC – helping to account for our citywide attrition rates of 25%, twice as high as anywhere else in the state.

Ric is a MIT grad, a former aerospace engineer, a rocket scientist w/ the Apollo project, and an investment banker, who decided what he really wanted to do w/ the rest of his life is teach poor kids. He was given some training at and then assigned to a large HS in the , where he was given five classes of 30 students each. He quickly figured out that his job was humanly impossible – to provide enough help and attention to his 150 low-performing students to get them up to grade level and able to pass their Regents tests, especially given their huge class sizes. After one year he left, and despite his yearning to teach poor and minority students, he is now at an elite private school in Manhattan where no class is larger than 15 – and they are lucky to have him.

In any event, as a result of the overwhelming success of smaller classes in K-3 in CA, and its huge popularity with teachers, parents, administrators, and voters, the state is now expanding funding for CSR in upper grades as well, esp. for low-performing school districts. And not one candidate for statewide office, even the most conservative of Republicans, has ever proposed cutting the funding for the program – even when the state faced multi-billion dollar deficits.

In , the political support has also been strongly bipartisan. Despite three attempts by Jeb Bush to overturn the program when he was governor, the Republicans who controlled the state Senate refused to support his efforts, and the new GOP governor Charlie Crist is now further expanding its funding, as the state moves from schoolwide averages towards actual caps on class sizes in every classroom -- no more than 18 per class in K-3, 22 in 4-8 grade, and 25 in high school.

Moreover, the program has proved to be a lot less expensive and easier to implement than anyone expected, and nearly every school in the state is in compliance. See http://www.firn.edu/doe/arm/class-size.htm for more on ’s program. As of this fall, only 177 public schools in the state had average class sizes larger than this – out of 3, 038. Charter schools were much more likely to have larger classes – with 88 of 358 out of compliance.

Anyway, sorry this has been so long – and not a short answer at all. But since Klein and so many others ( including Senator Schumer, though I haven’t read the book so I can’t be sure) have been so long-winded and essentially wrongheaded about the lessons of , I thought it was time for a correction.

Hi Norm,
Thanks for the mention of my book, "Man Overboard: Confessions of Novice Math Teacher in the Bronx" in your 2/10/07 blog. Actually, after my first year in the Bronx I taught in the South Bronx at an even tougher Gates-Foundation sponsored school for older previously failed students. I only left when after I was openly slapped by a student there were no conseqences for the child.