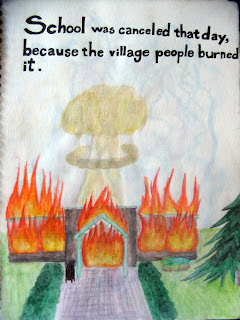 The Department of Education hasn't listed our school in any of its press releases. So here's mine.

For over 17 years, it served as a literal beacon of light for some of New York's most disaffected youth. Now, after having established consistently strong scores on state exams, excellent graduation rates and after having created one of the safest school environments in New York City, the Dept of Education has decided to close the doors of Brooklyn Comprehensive Night High School.

Established as one of the first schools for over-aged and under-credited youth, Brooklyn Comprehensive Night High School has been a safe haven for disadvantaged youth 18-21 years of age. It has provided them with the opportunity to obtain a high school diploma -- not a GED --at night. These students have often attended more than one high school with limited academic achievement. Often they carry enormous adult responsibilities or have experienced profound personal loss. Take Daniel Laguer: early in his high school career, he lost one brother to an untimely death and one to prison. Without what he called, "his blueprints to life" he became despondent and the school he attended had poor control over its students, so he began to cut classes and then school altogether. With a failing average, he came to Brooklyn Comprehensive Night High School looking to re-build an academic career. And he did so far beyond his expectations, becoming an honors student who is now a sophomore at Brooklyn College.

While not all students developed such academic excellence, for many the school served as a place for them to begin to take pride in their studies and to develop the foundation of skills they never had. Students who came from abusive households, some in foster care, some living on their own, found the small school to be their substitute family. Assisting them in this process required patience and extensive individual attention. The school offered students tutoring before and after school, small classes, a safe and quiet environment and the understanding that they would have some of the time they would need to change. After so many years of academic difficulties, the school did not expect students to become instant successes. Nor did it make that success easy. However, the school's culture took it's cue from it's motto "Ad astra per aspera" --- "To the stars despite the difficulties."

The Dept of Education, in its meeting with staff and administration, acknowledged that there was no academic reason for closing the school. They criticized the school, rather, for its attendance. Simply put, the school does good work but for too few students. As the student population which the school has served comes with a history of little or no academic achievement -- most have averages below 60 -- it is difficult to imagine how the Dept. of Education could expect instant and immediate success. Frequently, students take time to build attendance-- often a student will not pass in his/her first term or even year at the school. Many of our students have experienced personal crises which do not stop just because they have signed up at our school. It may take a term or a year for the school to work with the student to help them to build their skills and try to assist them in stabilizing their lives. And as this population is comprised entirely of students who have poor records, it is inevitable that some of them will need more than the school can give. After all, statistically these are the lowest performing students with the least chance of graduation from any academic program.

Brooklyn Comprehensive, however, had a policy of trying to work with students even if they did not immediately make significant changes. In giving them the time to try to adjust, it risked having attendance records which reflected their absences. In its very premise, the school was betting against what their previous records seemed to indicate. A majority of the students presented undiagnosed learning disabilities and/or had missed significant portions of their schooling --their need for remediation was intensified by years of neglect. Often these students were also extremely intelligent and dedicated to the effort to change their lives -- a dedication which increased as they improved. For Brooklyn Comprehensive, therefore, the students' potential was worth the risk. The efforts of the school were rewarded by a student body which achieved more and more each year. Sadly, the Department of Education is unwilling to see that taking such a risk provides opportunities for students like Daniel to get the time they need to excel beyond what any statistics might have predicted.

I graduated for here in 1995. I can say if this school wasn't around I probably would not have my Diploma to this day.

I dropped out of school at 17 years old and 2 years later in 1999, I found BCNHS. I graduated the following June and earned awards in academic excellence. I wouldn't have done it without this school or the support and encouragement I received from my teachers. After attending BCNHS, I fell in love with education. I went on to get my BA in English and am now in graduate school pursuing a Master of Arts in Teaching. I am deeply disappointed to learn this school no longer exists; it would have been nice to return to BCNHS as an English teacher.

The former faculty and alumni of BCNHS do try to stay in touch. If you want to share your success with us, send me an email at fkay24@gmail.com. Thanks, Ms. Kay

The former faculty and alumni of BCNHS do try to stay in touch. If you want to share your success with us, send me an email at fkay24@gmail.com. Thanks, Ms. Kay

I graduated from BCNHS out of Midwood High School! If it wasn't for them I wouldn't have got my diploma either!

I just was looking up how to get a duplicate diploma when I found out Mrs. Bermiss passed away. Bcnhs is the reason my brother,best friend and I graduated. This school was the nest thing that happened to us. I wish I knew where all the teachers were.

I miss you all.
Ms. Pearce