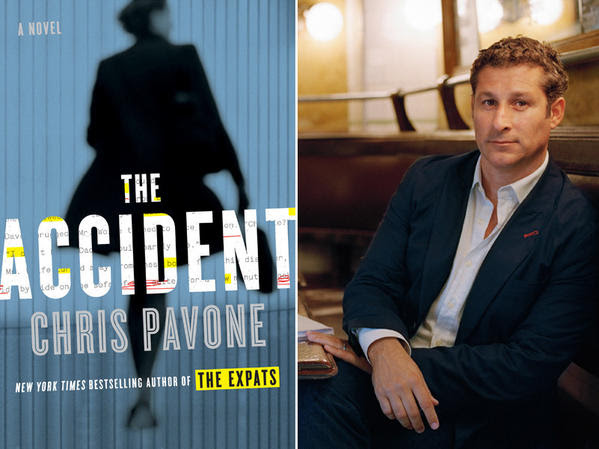 The cover of "The Accident" and author Chris Pavone. (Crown; Nina Subin)

No advice is more confusing to writers than "write what you know." Taken to its solipsistic extremes, it would mean novelists could not write characters outside of their own gender, race, geography or professional background. While the works of Susan Straight, Khaled Hosseini, Elizabeth George and others make clear the fallacy of that thinking, a writer's experiences and observations do play a significant role, along with research, in creating a believable universe for their characters and stories.

But what of the spy novel? Is special knowledge of spy craft, the inner workings of the CIA, MI6, CIA or Lakam essential in making such fiction credible?
Consider Chris Pavone. A few years ago, the longtime literary editor and ghostwriter moved to Luxembourg to care for his twin sons while his wife took a job in that country. There, Pavone's exposure to similarly uprooted women who knew little of their spouses' work led him to write "The Expats," which masquerades as the story of an expat wife and bored stay-at-home mom but is really a deviously plotted, Edgar-winning thriller that explores the boundaries of honesty, transparency and self-reinvention in marriage, life, and the shape-shifting world of international espionage.
Pavone has again mined his own life experience — this time in the publishing industry, where he worked for almost two decades — to write "The Accident." Told over the course of one fraught 24-hour period on two continents, the novel's heroine is New York literary agent Isabel Reed, battered by tragedy, divorce and being "just old enough to be congenitally uncomfortable with new technologies." Isabel has been up all night compulsively reading "The Accident," a manuscript that landed unsolicited in her in basket at Atlantic Talent Management.
The contents of the tell-all biography of a powerful media magnate, penned by Anonymous, are literary dynamite (for reasons not immediately made clear) and significant enough that Isabel's concerns are not just getting the book to the perfect acquiring editor but trying to figure out how to stay alive long enough to see it published. Before the reader can figure out exactly why, the novel cuts to Hayden Gray, refined cultural attaché and a Paris-based CIA operative introduced in "The Expats." Assisted by Kate Moore (another "Expats" alum), Hayden is surveilling a man in Copenhagen doing research on a book. Is this man "The Accident's" Anonymous, or a fact checker employed by the author? And why should the CIA care?
Pavone layers on further intrigue as he introduces, in successive short chapters, a cast of well-drawn players, all willing to betray one another and their own values at the drop of an eight-figure book deal. Among them: Alexis, Isabel's naively ambitious assistant, who recognizes in her boss a mentor and a launching pad; Jeff Fielder, a once-relevant fortysomething editor at McNally & Sons "who never met a conspiracy theory he didn't like"; Brad McNally, the pot-smoking publisher looking to bring in much-needed revenue to stave off a corporate takeover; and Anonymous, whose relationship to media baron Charlie Wolf provides him with unparalleled knowledge of the tragedy and subsequent dirty tricks at the heart of this too-hot-to-handle biography.
As flashbacks and excerpts from the manuscript are interspersed throughout the novel, readers will come to understand why the secrets that website billionaire Wolf (a self-satisfied mash-up of Arnon Milchan with Ted Turner) and the CIA are keeping would motivate Anonymous to go into hiding in Europe and Hayden Gray to authorize the off-the-books elimination of those even remotely connected to the manuscript. These gruesome events serve to ratchet up the tension for the reader and amplify Isabel, Jeff and Anonymous' desperate search for a way out of this seemingly lose-lose proposition.
"The Accident," like "The Expats," contains enough credible spy craft, dead bodies and incisive observation of the politics and perils of international espionage to pass muster with all but the most persnickety aficionados of the genre. And while Anonymous' identity will probably be obvious to the careful reader, it is Pavone's insights into myriad professional and personal betrayals that infuse "The Accident" with its vibrant core. That and his insider's knowledge of publishing shine, resulting in a novel rich in trenchant details about the motives and machinations of the book business — from genteel back-stabbing in literary agencies and publishing houses to the Pinot Grigio-and-dried-out Manchego book-launch parties.
New York is also knowingly limned here — the private Greenwich Village clubs with rooftop pools and posh midtown brownstones where Isabel seeks help from her well-heeled clients, the Hamptons in all its geographical one-upmanship, where the chase culminates in mayhem and a few surprises that set the stage, one hopes, for more intrigue down the road.
All told, "The Accident" is a propulsive A-train of a thrill ride and worthy successor to Pavone's debut, destined to make readers as compelled to turn its pages as Isabel and her colleagues are to publish the manuscript that spawned it.
Woods has written four mysteries in the Charlotte Justice series and edited several anthologies.
The Accident
A novel
Chris Pavone
Crown: 381 pp., $26