By Allison Kilkenny
Thousands of protesters gathered at Brooklyn Tech High School yesterday evening to oppose 25 pending school closures, 13 of which are scheduled to occur in Brooklyn.
Modifying a staple Occupy Wall Street slogan, the crowd chanted, "All day, all week, occupy the DOE!" (photo by @ydanis) 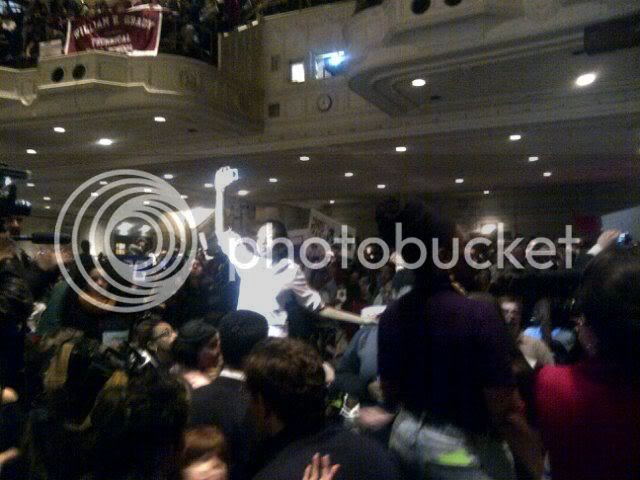 Despite the large turnout, WABC reports the Panel for Education Policy voted to close 18 New York City schools anyway. However, many first-hand witnesses and the New York Post report that the panel voted to shutter all 23 schools on the list (The Post has a list of the school closures at its website).
The count discrepancy may be due to the panel voting to close or partially close the schools. According to the Wall Street Journal, the board voted to close 18 schools and "shrink" 5 more. Most of the schools slated for closure will be phased out over several years.
NY Post:

The vote at Brooklyn Tech HS in Fort Greene set a record for the number of schools closed by the Panel for Educational Policy in one night.
“We’re making difficult decisions — that people may or may not agree with — to make sure we’re providing quality education to our students as quickly as possible,” said Chancellor Dennis Walcott.

The Post reports that nearly all the 23 affected schools serve a greater proportion of high-needs kids — such as special-education students living in poverty — than the citywide average, according to an Independent Budget Office study.
The panel, the majority of whose members are appointed by the mayor, have never voted down a school closing.
Some educators expressed their frustration with city officials, who they accuse of scapegoating teachers and schools for the unpopular decisions of bureaucrats.

“People are getting fed up,” said teachers union president Michael Mulgrew told the Daily News. “They’re sick and tired of schools being blamed for the failure of the city.”

“There are important proposals up for discussion,” Walcott said. “If all the (teachers union) wants to do is bus in Occupy Wall Street protesters . . . then we will just have to work around that.”

Education officials insist the schools have been failing too long to be permitted to go on operating without the closures, but school supporters blame poor performance records on budget cuts and lack of resources.

"They removed $700,000 in funds from our school, and our school declined," said a man who was at the meeting. "The test scores for our children were poor -- understandably, because there was no money for our schools."

School closure opponents often point to the domino effect of shuttering schools, meaning that once the panel votes to close a school, that sets up surrounding schools for failure as they will soon be overwhelmed with students from the closed institutions.
Another 33 city public schools face potential closures, and the board will vote on them in March or April.
In 2011, the panel approved 22 closures in two separate meetings that each lasted well past 1 A.M. In 2010, the panel's vote on 20 school closures took place before 4 A.M. after more than 10 hours of protests and public comment.
Gothamschools.org has a map of NYC school closures, proposed turnabouts, and truncations. 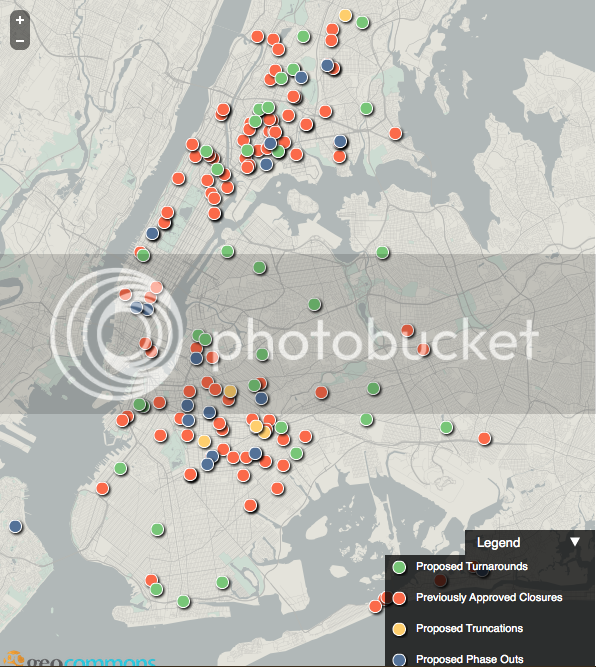 Eleven of the proposed closures this year are institutions that replaced schools the administration closed in the past, and there is no indication that shuttering schools or "truncating" them in any way benefits students in the long run.
Posted by ed notes online at Sunday, February 12, 2012