The Temporary Reassignment Centers have been relegated to the back of the bus in
the struggle to preserve public education and the careers of the NYC public
school teacher. But we are critical to the plan to dismantle and discredit
public education. The TRCs are in the front line "representing" as we do the
repository of arbitrary power of principals as memorialized in the 2005 UFT
contract; "representing" as we do tangible evidence of the incompetence and
moral turpitude of the NYC teacher;"representing" as we do the best PR tool
Bloomberg-Klein have to overthrow tenure' 'representing' as we do the face of a
union too cowardly to defend its members while they are in the school;
representing as we do the means by which Bloomberg-Klein chill all opposition
within the schools- chapter chair leaders included. And lastly, providing the
back door to the creation of more ATRs- and we know what is going to happen to
the ATRs.

Given the above, members of a Reassignment Center have put together facts all
teachers and the public should know about the 'rubber rooms' (TRCs). We hope to
get the attached fact sheet into the schools- the public schools that is.
Forewarned is forearmed.

We communicate with the press, politicians, and parents' groups. 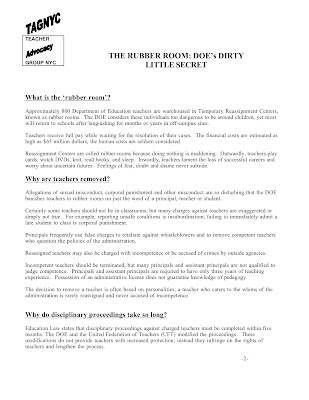